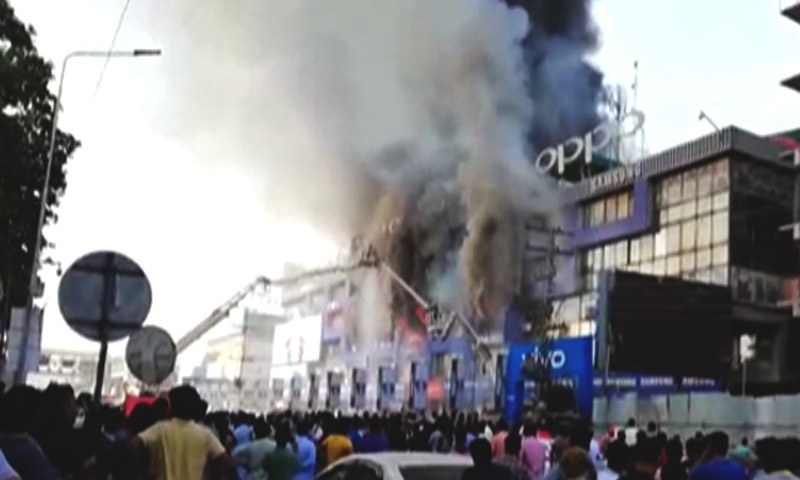 A massive fire erupted in Lahore’s Hafeez Centre on Sunday morning, with flames engulfing four of the centre’s floors as firefighters tried to put out the blaze.

Eyewitnesses said the fire started on the second floor of the building but gradually travelled to the fourth floor. CCPO Sheikh said 25 people had been rescued from the building so far and there were no reports of casualties so far.

While talking to the media, the DC said the fire has been brought under control to a “significant extent”, adding that focus was now on parts of the building still on fire.

“Workers from Rescue 1122 and fire department are present at the site and are working on putting out the fire. Snorkels are also present and all resources will be utilised,” he said, adding that he was leading the efforts himself.

Meanwhile, Lahore Commissioner Zulfiqar Ghuman has constituted a 14-member inquiry committee to look into the incident and directed it to submit a preliminary report within 24 hours. The committee comprises officials from Metropolitan Corporation of Lahore (MCL) and Rescue 1122 and will ascertain the “underlying causes of the fire incident”, determine loss of property, examine infrastructural stability as well as assess the efficacy of emergency response by the concerned department.

Rescue officials said that the initial survey suggests the fire broke out due to a short circuit, adding that a definite reason could only be given after the report was submitted.

Punjab Chief Minister Usman Buzdar took notice of the incident and directed that authorities use all resources to put out the fire.

“Priority should be given to rescuing people stuck inside [the building],” he said and directed “immediate investigation” into the incident.

Source Link: Massive fire at Lahore’s Hafeez Centre yet to be put out completely – Pakistan

Share
Previous As new Netflix movies stream in 4:3, is there hope yet for the abandoned aspect ratio?
Next Asad Umar responds to PDM jalsa speech