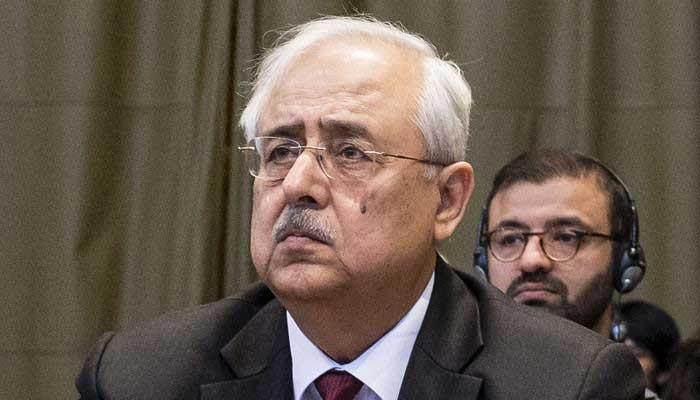 ISLAMABAD: The Supreme Court on Wednesday directed Attorney General Anwar Mansoor Khan to produce evidence supporting his statement or submit a written apology about his controversial statement against the judges, which he gave during the hearing of Justice Qazi Faez Isa case, reported The News.

The order was issued by a 10-judge larger bench led by Justice Umar Ata Bandial during the hearing of Justice Isa’s petition challenging the presidential reference filed against him over alleged non-disclosure of assets in his wealth statement.

During the hearing, the court reprimanded the attorney general for appearing before the court without preparation and asked him to submit in writing what he had said on Tuesday, or else he should tender a written apology.

AG Khan had levelled allegations against the bench which irked the full court asking him to withdraw his statement.

“Certain statement was made by the attorney general about the bench and it would be appreciative that the material on the basis that he has made statement be placed before the bench,” the court noted down in its order.

“In case, no material was placed before this bench, we expect a written apology from the attorney general for having to touch the matter,” the court further noted in its order. “It is not against one but every member of the bench,” it added.

The court further observed that the AG made a submission on the definition of misconduct and what should be the conduct of a judge laid down in different judgments.

“We have asked him as to what is the factual basis for invoking these definition and discussion,” said the order, adding that in the present case, in order to understand the reference, he discloses prima facie misconduct against a judge.

The court granted time to the attorney general to collect the facts that address the definition which he would like to read before it.

Earlier, at the outset of the hearing, the court directed the AG to tell the court at the next hearing about the existing laws pertaining to declaring foreign assets and to assist the court as to whether these laws could also be applied on judges of the superior courts.

The court observed that it would have to be established legally that declaring the foreign assets of spouse and children was mandatory for the judge.

“A reference against a judge must be based on substantial material,” Justice Bandial observed, adding that if the reference is based on mala fide, judgments of the apex court are in field in this regard.

Addressing the AG, Justice Bandial inquired as to whether it is a reference or an FIR, adding that he was just wasting the court’s time by focusing on irrelevant things.

Justice Sajjad Ali Shah asked the AG that his arguments would be irrelevant until and unless he establishes the misconduct of the judge.

Justice Mansoor Ali Shah also told the AG, “You are saying everything but not replying our questions.”

Justice Shah further asked the AG as to what measures were taken after filing a complaint against the petitioner judge and under what law as well. “Suppose if the petitioner had declared the said properties in his wealth statements, then a reference could be made against him,” Justice Muneeb Akhtar asked the AG.

“No reference than could be made against him,” the AG responded.

The court after hearing the arguments adjourned the hearing until Monday.

On Monday, Justice Isa argued in his written synopsis that information against him and his family members was gathered through surveillance using illegal means.

He contended such kind of surveillance on a judge was not lawful and urged the court to quash the presidential reference and proceedings in the Supreme Judicial Council.

The reference filed against Justice Isa alleges he acquired three properties in London on lease in the name of his wife and children between 2011 and 2015 but did not disclose the same in his wealth returns.