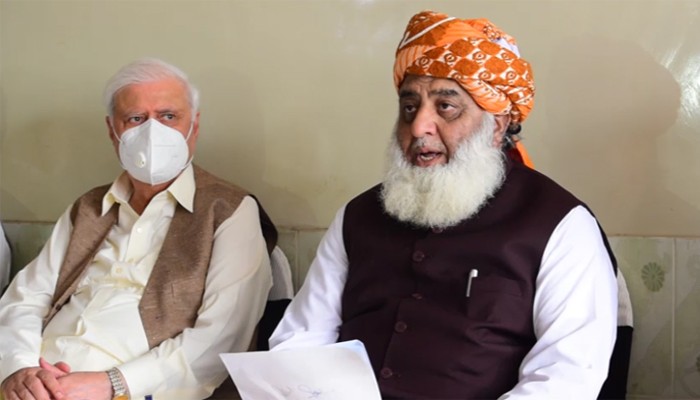 JUI-F chief Maulana Fazlur Rehman on Saturday demanded that after the merger of the tribal areas with Khyber Pakhtunkhwa, the province be provided a larger share of the 10th National Finance Commission award and that the grant to provinces be more than the current 57.5%.

His remarks came during a media briefing in Peshawar following a multi-party conference.

The NFC is an economic programme whose purpose is to divide financial resources between the centre and the provinces for five years. The 10th NFC was constituted on May 12. The terms of reference this time include the Centre wanting the provinces to bear additional fiscal responsibilities as it fights to curb the coronavirus pandemic.

Rehman said he “condemns the dragging in of issues like the NFC into the coronavirus response”.

He said that the current government had been “birthed out of rigging” and that it is “responsible for the spread of the virus”.

Rehman said he regrets the “callousness” shown by the foreign minister toward the issues faced by overseas Pakistanis.

He said all attendants of the multi-party conference demand the immediate return of bodies of the deceased awaiting repatriation abroad.

“The Peshawar airport must be opened to overseas Pakistanis and tickets that are accessible without currying someone’s favour must be issued,” he said.

He also demanded that educational activities be allowed to resume.

Rehman said the province must be given Rs500bn under the AGN Kazi formula and after the merger of tribal territories, the security of people there be guaranteed.

The Aftab Ghulam Nabi Kazi committee, named after and headed by the deputy chairman of the then Planning Commission, was formed in July 1985 to frame a formula for the calculation of the NHP (net hydel profit) to the provinces under Article 161(2) of the Constitution.

Speaking of the Justice Qazi Faez Isa case, he said that the presidential reference is “based on ill-intent”.