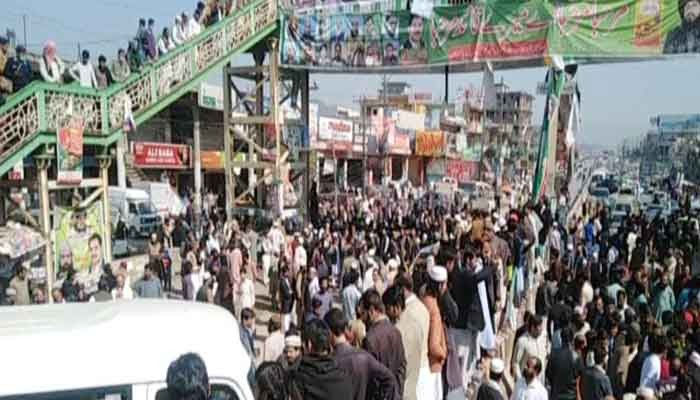 ISLAMABAD: Protests that sprang up Sunday in the federal capital’s Bara Kahu locality against the killing of three people, including a local leader of the Opposition party, the JUI-F, were called off following negotiations with the authorities.

Negotiations with the protesters blocking the Murree Road (N-75) were successfully carried out by Islamabad Deputy Commissioner Muhammad Hamza Shafqaat and the senior superintendent of police (SSP) for operations.

“Murree Road has been reopened to traffic after talks with the administration and police,” Shafqaat wrote on Twitter.

He also apologised for the inconvenience caused.

The JUI-F leader’s son, brother, and student were killed in a firing incident in Islamabad’s Bara Kahu on Saturday. According to police, two of the dead were identified as Ikramullah and Samiullah while the third was a student.

‘Will hold a protest again’ if killers not arrested

Protesters subsequently dispersed from the Bara Kahu locality and took the bodies of the slain with them. However, they warned that they would not bury the deceased until the killers were arrested.

“If the culprits are not arrested, we will hold a protest again,” they said.

As the protest died down, the Athal Chowk portion of the Murree Road (N-75) was reopened for traffic.

Earlier, the JUI-F’s workers, as well as the families of the slain, staged sit-ins and demonstrations at Bara Kahu’s Athal Chowk, with protesters blocking the Murree Road that resulted in severe traffic jams and long queues of stranded vehicles.

Qari Karamatur Rahman, a local JUI-F leader, said the victim was an active party member but the FIR of the incident had not been registered yet.

The incident was proof of the abysmal performance of the government and the administration, Qari Rahman lamented, saying the sit-in would continue till the culprits were arrested.