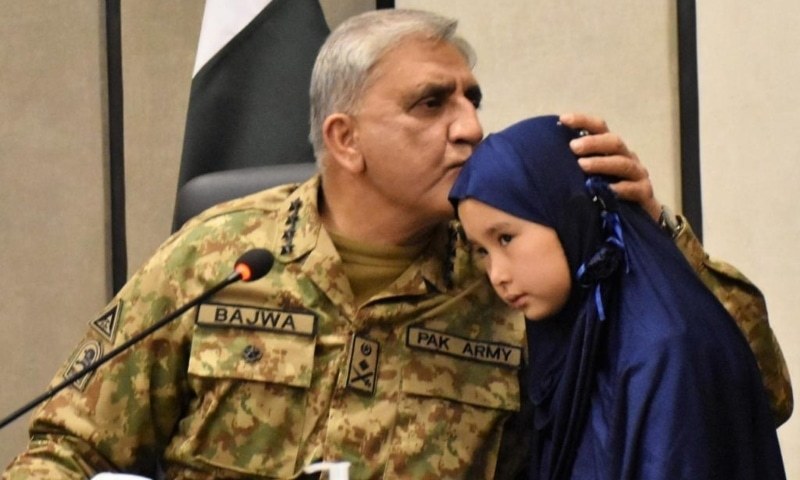 Army Chief Gen Qamar Javed Bajwa on Wednesday paid a visit to Quetta, where he assured families of the Shia Hazaras coal miners killed in a brutal attack in Balochistan’s Mach area that the perpetrators of the killings “shall be brought to justice”.

During the day-long visit, the chief of army staff was given a detailed security briefing at the Southern Command headquarters and interacted with a large gathering of the Hazara community, an Inter-Services Public Relations (ISPR) statement said.

The army chief was apprised during the briefing about the prevailing security challenges in the province and the measures taken to deal with them, including border management along the Pak- Afghan and Pak-Iran borders.

Gen Bajwa spent time with the bereaved families of the Mach incident’s victims and shared their grief. He “assured them that perpetrators of this heinous incident shall be brought to justice and blood of the martyrs will not go waste”, the military’s media wing said.

Later, while addressing the garrison officers, the COAS appreciated their preparedness and efforts for ensuring peace and stability in Balochistan “despite difficulties of terrain and distances involved”.

“Balochistan is in sharp focus of our enemies due to its strategic potential,” Gen Bajwa was quoted as saying on the occasion.

He said Balochistan was the future of Pakistan and progress and prosperity of the province was linked to progress of the country.

“The disruptive efforts by hostile forces won’t be allowed to succeed,” the army chief emphasised, saying the security, stability and prosperity of Balochistan will be ensured “to the hilt”.

On January 3, 11 miners belonging to the Shia Hazara community were brutally massacred in the Mach coalfield area. Armed assailants had entered their residential compound early in the morning where they were sleeping, and blindfolded and trussed them up before executing them. The militant Islamic State (IS) group, also known by the Arabic acronym Daesh, claimed responsibility for the attack.

Relatives and residents started a protest against the killings on the same day, arranging the miners’ coffins on the Western Bypass on the outskirts of Quetta and refusing to bury them in a symbolic gesture until the prime minister’s visit and assurance of protection.

The protests later spread to other parts of the country, including Peshawar, Lahore and Karachi, where demonstrators blocked several important roads, disrupting traffic.

After a deadlock lasting for nearly a week, talks succeeded between the protesters and the government, leading to the end of the protests and burial of the miners on Saturday.

Share
Previous Sonny Side of Sports
Next International Edition

CDA employees arrested for stealing petrol from vehicles in Islamabad

A general view of a residential area seen during a power breakdown in Karachi, Pakistan, …