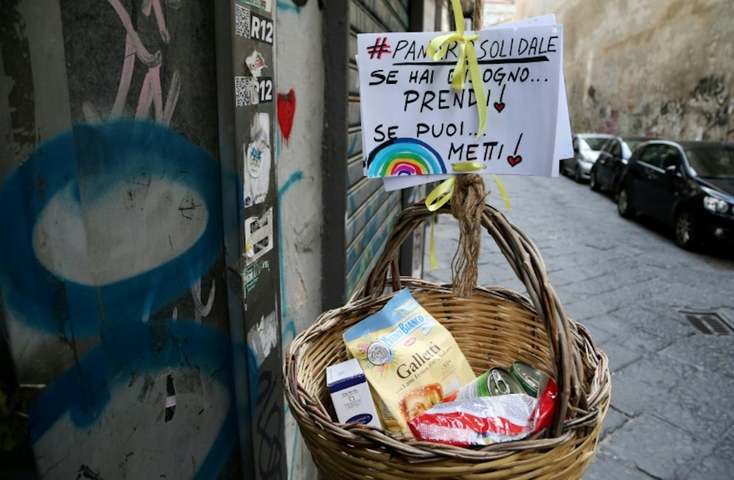 “Naples is a city with a tremendous resilience to suffering,” says Mayor Luigi de Magistris.

Angelo Picone lowers a wicker basket full of food to the ground on a rope, leaning over his rustic balcony, verdant with pot plants.

“If you can, put something in. If you can’t, take something out,” Picone, a Naples street artist, merrily hollers to bemused passersby in the alleyway below.

Picone’s simple message is resonating in a country trying to feed a growing number of poor during the coronavirus pandemic.

Covid-19 has officially killed nearly 200 in Naples and more than 15,000 across Italy in just over a month.

It has also shattered the Mediterranean country’s economy and left millions at least temporarily unemployed.

This makes the hanging “solidarity baskets” and foldout tables laden with food — everything from bread and bananas to boxes of milk and tins of sardines, as well as hot dishes — all the more important at one of the most surreal moments in the city’s history.

“This is a special sign of solidarity,” Picone says. “The basket is there. It ensures anonymity.”

Yet Naples’ unrepressed romance is in the spring air at even the dourest of times.

A slender young man wearing a black coat and a loose scarf breaks into song for no apparent reason.

A few smiling women on the nearby balconies of squat pastel buildings shout “bravo” and applaud after he finishes with a hand-waving flourish and takes a bow.

The young man then sticks his hand in the food basket and walks away with a cheeky bounce in his step.
The performance was his personal contribution in exchange for the food.

Picone speaks with nonchalance about how he drew his inspiration from a city doctor who did something very similar for the poor a century ago.

According to local legend, doctor Giuseppe Moscati held out his hat at the end of his consultations.

Patients were not obliged to pay and dropped in as many coins as they could afford.

The good doctor was canonised by the Catholic Church in 1987.

“We are fortunate that in Naples we feel like we need to help each other out,” says Gennaro, a street artist like Picone.

A person waring a face mask pulls two bags of cookies from the wicker basket and holds them aloft in self-deprecating celebration.

“Naples is a city with a tremendous resilience to suffering,” Mayor Luigi de Magistris tells AFP.

EU statistics show about two out of five risked poverty in 2018 in the city of 2.2 million.

A UN study found that a third of the Naples’ 15- to 29-years-olds either had no job or had dropped out of school that year.

The black market economy thrives, as well as the accompanying crime.

An estimated 3,500 Neapolitans have so far asked for food aid under a coronavirus relief programme launched last month.

The two street artists and others like English language tutor Teresa Cardo decided that something more substantial — possibly more personal and immediate — needed to be done.

They lowered their first baskets, explaining the idea in a little note.

“We started by putting a piece of bread, a bag of pasta, a box of peeled tomatoes,” Cardo says.

“And two hours later, the basket was completely full.” The mayor is understandably proud. “Naples is a city with a big heart,” he says.

But he also laments the various social distancing measures designed to keep people away from each other as much as possible.

The mayor wants the old Naples back.

“I miss it very much, because in general for human beings but even more so for Neapolitans, it is absolutely against our nature not to hug, not to shake hands. “

Share
Previous How to watch the Queen’s Coronavirus speech online for free: stream from UK or abroad
Next BCCI urged to plan shortened IPL in current year after COVID-19 | Sports

French forces have killed the leader of militant group Al Qaeda in the Islamic Maghreb, …