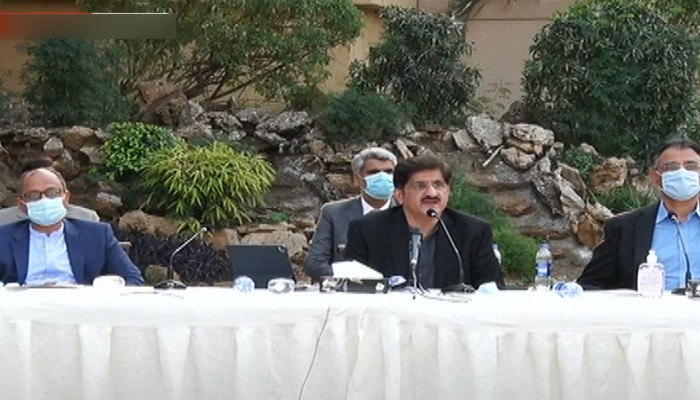 Federal Minister for Planning and Development Asad Umar on Saturday said that political parties would get several opportunities for politicking, however, there was a need to work together for development.

Addressing a press conference alongside Chief Minister Sindh Murad Ali Shah, Federal Information Technology Minister Amin-ul-Haque, and other ministers, Umar said that the citizens of Karachi were looking to the province and the Centre for development in the city.

Speaking about the Green Line project, Umar said that the project was nearing completion and that the Karachi Circular Railway would be completed before the ML1.

“Sindh government has the right to remove encroachments” — not the federal government, the planning minister added.

Addressing criticism about Pakistan still not having placed an order for the coronavirus vaccine, Umar said: “We have not lied to the nation about vaccine procurement.”

He added that the vaccine will reach Pakistan “by March”.

Meanwhile, taking over the presser, the chief minister shed light on the progress that the provincial government had made so far in Karachi’s developmental works.

The provincial chief said that the federal and provincial governments, after the Karachi rains that had wreaked havoc in the city, came up with a comprehensive plan to drain water.

To begin with, work started on the Mehmoodabad nullah, in which 205 houses were broken or completely leveled to clear the nullah.

The chief minister said that the Supreme Court had ordered the National Disaster Management to do the work, however, the Frontier Works Organisation had started the task, and before monsoon, works on all the nullahs would be completed.

“Now, works will begin on Gujjar Orangi nullah,” he said, adding that the government aimed at fixing the city’s three major nullahs.

On encroachments in the city, he said that an initial survey showed that thousands need to be removed, however, the number was reduced.

So far, the government did not face resistance in removing encroachments from the nullahs, the chief minister said.

The chief minister said that the provincial government’s officials had expressed their reservations over the census during the meeting.