In a historic first, Pakistan and India to officially open Kartarpur Corridor today 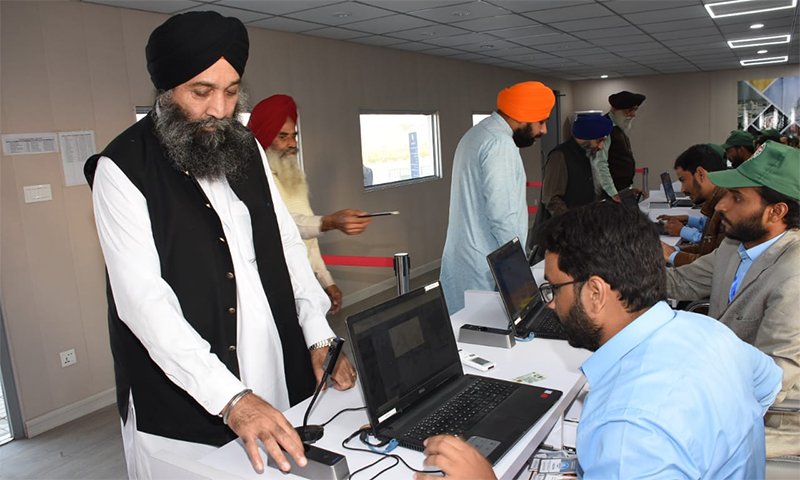 Hundreds of Indian Sikhs are set to make a historic pilgrimage to Pakistan on Saturday, travelling visa-free to one of their religion’s holiest sites under a landmark deal between the two countries separated by the 1947 partition of the subcontinent.

The shrine to Guru Nanak, the founder of Sikhism, lies in Kartarpur, a small town beside the River Ravi in central Punjab province where he is believed to have died.

In pictures: Spruced up Gurdwara Darbar Sahib set to welcome Sikh pilgrims from around the world

Indian Prime Minister Narendra Modi will see off the first group of pilgrims later on Saturday, and they will be welcomed by his Prime Minister Imran at the shrine.

Prime Minister Imran had performed the groundbreaking of corridor last year. Since then, the government has employed hundreds of labourers to spruce up the shrine, including building a border immigration checkpoint and a bridge, as well as expanding the site’s grounds. After tough negotiations between Islamabad and New Delhi, Pakistan and India finally signed an agreement last month.

Ahead of the opening, the prime minister also announced special waivers in order to facilitate Indian pilgrims. Pilgrims, who arrive from India, will no longer need a passport to cross over into Pakistan as long as they have a valid identity.

The premier had also announced that he had directed that the condition for pilgrims to register 10 days before their arrival to the Kartarpur shrine be waived.

Furthermore, the pilgrims who arrive on the day of the Kartarpur Corridor’s opening and on Baba Guru Nanak’s 550th birth anniversary will not be charged any fee to visit.

Up to 5,000 Indian Sikhs have been allowed access daily, with plans to eventually double the capacity.

Sikhs from around the world — including some from India, who entered from the main border crossing at Wagah after obtaining visas — have been arriving in Pakistan ahead of the celebrations for several days already.

For up to 30 million Sikhs around the world, it is one of their holiest places. When Pakistan was carved out of colonial India at independence from Britain in 1947, Kartarpur ended up on the eastern side of the border — though most of the region’s Sikhs remained on the other side.

Read: The Kartarpur Corridor is more than a symbol of new peace

For them, it is tantalisingly close — just four kilometres inside Pakistan, so near that Indian Sikhs have been known to stand on the other side and simply gaze across the divide at the site.

But decades of enmity between India and Pakistan, nuclear arch-rivals who have fought three wars and countless skirmishes since independence, has left extreme restrictions on their ability to visit.

Until now, when — in a rare example of cooperation between the neighbours — a secure visa-free corridor will open on Saturday allowing pilgrims to travel by road straight into the temple — known in Sikhism as a gurdwara.

The opening comes just days ahead of Sikhism’s founder Baba Guru Nanak’s 550th birthday on November 12, which is marked with celebrations by millions of Sikhs around the world. The shrine will be one of the most important places for Sikhs on that day.

“This land is sacred for them,” Habib Khan, the 63-year-old imam of a small mosque just outside the gurdwara, told AFP on Friday.

Vans of pilgrims could be seen travelling through Kartarpur on Friday.

The Indian flag could be seen flying across the border, just beyond fields dotted with eucalyptus and guava trees — though it was half obscured by the heavy smog that has blanketed large swathes of South Asia in recent days.

Contingents of Rangers dotted the rice-growing region which, being so close to the border, is heavily secured, with multiple checkpoints.

Pakistan has employed hundreds of labourers to spruce up the shrine, including building a border immigration checkpoint and a bridge, as well as expanding the site’s grounds.

Educational institutions across Pakistan have been allowed to reopen from September 15. Federal Education Minister …