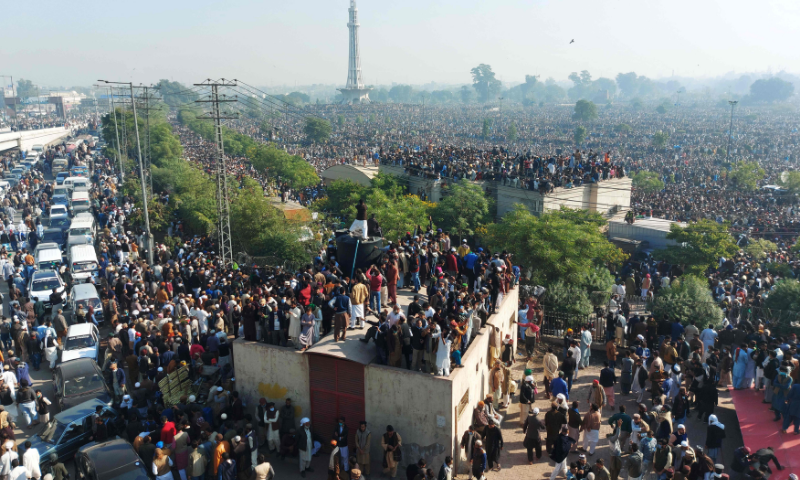 The funeral prayers for Tehreek-i-Labbaik Pakistan (TLP) chief Allama Khadim Hussain Rizvi, who passed away on Thursday night, were offered at Lahore’s Minar-i-Pakistan on Saturday afternoon.

Thousands of people gathered at the site to attend the funeral prayers with many complaining of mobile signal outages. The prayers were led by Rizvi’s son, Saad Hussain Rizvi, who has been named the new TLP chief, according to TLP spokesman Salman Haider.

Rizvi was later laid to rest in the courtyard of Madressah Rehmatul Lil Alamin, the seminary associated with the mosque where he was a prayer leader, near Chowk Yateem Khana on Multan Road.

The city of Lahore started experiencing the impact of the death of the firebrand cleric when all entry points to the city and roads leading to his mosque faced traffic pressure, reporting long queues and jams. The pressure was set to grow today as thousands of his followers were expected to reach his funeral site and later to his burial site.

According to the Lahore chief traffic officer (CTO), five deputy superintendents of police (DSPs) and 36 inspectors were overseeing traffic arrangements in the city. In a statement, the CTO said that no point would be completely closed for traffic and diversions would be opened along the route of the funeral procession.

The funeral procession will move through the Niazi Shaheed Interchange, Bund Road, Babu Sabu Interchange and will stop at Scheme Mor.

Security in the city is on “high alert” on the directions of Lahore Capital City Police Officer (CCPO) Umar Sheikh with extra personnel posted at the entry and exit points of Lahore.

The TLP chief passed away two days ago at the age of 54.

According to the party’s spokesperson, Hamza, Rizvi had been experiencing difficulty in breathing and was running a fever since a day earlier.

The spokesperson added that Rizvi was at his madressah on Multan Road when his condition deteriorated on Thursday evening. He was subsequently rushed to the Farooq Hospital in Iqbal Town, where he was pronounced dead on arrival.

He is survived by his wife, two sons and three daughters.

Rizvi made his last public appearance last week at a sit-in staged by thousands of TLP followers at Islamabad’s Faizabad interchange to protest the publication of blasphemous caricatures of Prophet Muhammad (Peace Be Upon Him) in France.

The group had decided to end the sit-in on Monday (Nov 16) after successful negotiations with the government.

Wasim reveals reason behind appointing Babar captain across all formats