Govt will have to go home by January, declares Bilawal at PDM’s Peshawar rally – Pakistan 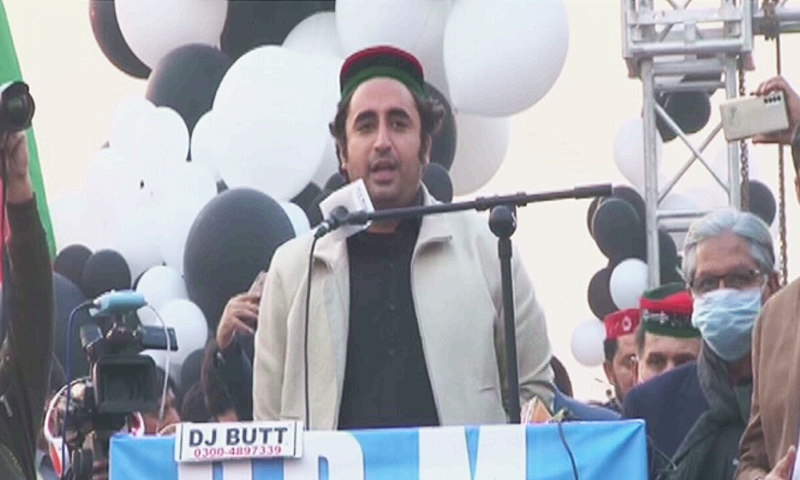 PPP Chairperson Bilawal Bhutto-Zardari on Sunday declared that the incumbent government will “have to go home by January” and called upon the masses to hold the rulers as well as their “selectors” accountable.

While addressing a rally in Peshawar arranged by the Pakistan Democratic Movement (PDM), Bilawal lamented that the erstwhile Fata was still deprived of its rights as the government was not releasing adequate funds for its development. He said that the people who had been displaced due to terrorism and military operations against militants had still not been rehabilitated. Residents whose family members had been killed by terrorists or whose houses and shops had suffered damages had not been compensated either, the PPP chief said.

Bilawal told the crowd that his party had struggled for Fata’s merger with Khyber Pakhtunkhwa for a long time and his mother, former prime minister Benazir Bhutto had even gone to court.

“Today, Fata has been merged with KP on paper but its people are not being given their rights. Even now areas in erstwhile Fata are off-limits [to visitors]. There are still legal blackholes, there are still internment centres. Late Peshawar High Court chief justice Waqar Seth had ruled that internment centres should be handed over to the police but sadly we never saw that happen,” he said.

The lawmaker further said the province, despite producing a sizeable share of crude oil that was distributed across the country, was not receiving royalties. He noted that the province also produced gas and hydel power that exceeded KP’s requirements, yet it was not being paid its fair share.

Bilawal also addressed criticism over PDM’s decision to hold the rally despite increasing Covid-19 cases, saying that the government “only remembers Covid when they want to stop our rallies and your protest”.

“They don’t remember Covid when it comes to regularising medical staff or increasing salaries,” he said.

The PPP chief also criticised the accountability process, saying that the National Accountability Bureau went after members of the opposition for “political revenge” but “does not have the courage” to pursue corruption cases against government figures. He declared the PTI government as the “most corrupt government in Pakistan’s history”.

“NAB doesn’t see how Peshawar’s BRT is the country’s most expensive metro system and its buses catch fire on their own. It doesn’t see corruption in Malam Jaba, or how buildings in New York were built through sewing machines. […] NAB does not have the courage to check how a special assistant was able to build a Papa John’s empire around the world,” Bilawal said and added that the country cannot have a strong accountability system until “there is one law for all citizens. Until there are same courts and laws for politicians, army generals and judges.”

‘Respect the army as defence institution’

Jamiat Ulema-i-Islam (Fazl) Chief Maulana Fazlur Rehman, during his address, extended condolences to PML-N supremo Nawaz Sharif and his family over the demise over the latter’s mother. Earlier PML-N Vice President Maryam Nawaz, after receiving word of her grandmother’s passing, told the crowd that she would not be able to address the rally.

Rehman also extended condolence to the family and followers of Tehreek-i-Labbaik Pakistan (TLP) Khadim Hussain Rizvi, who passed away on Thursday.

The JUI-F chief once again alleged that the 2018 general elections had been rigged and said that all political parties were in agreement on this point. Rehman said that the government was “flustered” by PDM’s rallies and added the rulers “should now be shamed and sent home”.

“Our stance is very clear. Rigging has been done, we know who was behind it and the one who is na maloom (unknown), we all know who that is,” said the JUI-F leader.

He then went on to say: “We respect the army if it is our defence institution. But if it tries to become a political institution, it will have to tolerate criticism. Then it should not say, ‘don’t take our name’.

“Even today, we are giving you this deadline; stop supporting them (government), withdraw [your backing] and declare that this is not our government. Raise your voice against this government along with us, we will then be brothers.

“Why do you indulge in politics?”

He deplored the poor state of economy, saying that in 2018 it was estimated that growth rate in 2019 would be 5.5 per cent and will continue to grow. The incumbent government, however, had ruined the economy, he said. Due to the wavering economy, no country in the world wanted to establish relations with Pakistan, claimed Rehman and went on to say that the incumbent government had ruined bilateral relations with China, Iran and Afghanistan.

Terming Prime Minister Imran Khan as the “Pakistani Trump”, Rehman said that the premier will be “rejected” just like the Americans had rejected US President Donald Trump in recent elections. He accused the prime minister of “wanting to finish Pakistan”.

Commenting on erstwhile Fata’s merger with KP, the JUI-F chief told the crowd that his party had said that the step should not be taken “in a hurry” and insinuated that the decision was taken under pressure.

“I know under whose pressure it was done (Fata merger). I know a lot of things.” He said that even an elected government does not have the mandate to “shift its boundaries”.

The Fata merger bill was passed in 2018 when the PML-N was in power. Nearly every political party had supported the merger, of which Rehman remained a fierce opponent.

Rehman, in his address today, said that Pakistan’s survival depended on the ouster of the incumbent government and that was the reason behind the PDM alliance.

Peshawar was on high alert as the PDM — an alliance of 11 opposition parties — prepared to hold a rally at Ring Road amid security threats and the risk of the spread of coronavirus.

Meanwhile, the Khyber Pakhtunkhwa government issued an advisory, warning about the “threat of terrorism” during the opposition’s rally. The chief minister’s adviser on information, Kamran Bangash, said police had prepared a security plan and informed the PDM organisers, workers and leaders to beef up their own security arrangements as well.

In a statement, Bangash said police and law enforcement agencies were ready to deal with any “unfortunate event”.

Peshawar Senior Superintendent of Police (SSP) Operations Mansoor Aman said that 4,500 security officials have been deputed for security. A control room has also been established to monitor the rally and an anti-riot force was ready in case of an emergency.

Traffic police have chalked out a traffic plan for the rally and banned the entry of all heavy traffic to the city.

Though the district administration had rejected the PDM’s request for permission for holding the rally, citing a spike in Covid-19 cases, the opposition alliance decided to go ahead with the showdown.

Workers of political parties put up a stage with the help of shipping containers.

A member of the organising committee said the opposition parties had arranged face masks and hand sanitisers for participants, while the district administration would also distribute face masks.

He said adherence to SOPs would be ensured in the rally to the maximum.

Meanwhile, Prime Minister Imran Khan lashed out at the PDM for “deliberately endangering lives [and] livelihoods” by going ahead with their rallies despite a rise in the number of coronavirus cases.

In a series of tweets, the premier said that several major cities had seen a drastic increase in the number of virus patients on ventilators.

He said that countries around the world were enforcing “complete lockdowns” amid a second spike in infections, warning that the PDM was “deliberately endangering lives and livelihoods” because the government in Pakistan too would have to impose a “complete lockdown” if cases continued to rise at the current rate.

“Opposition is callously destroying people’s lives and livelihoods in their desperation to get an NRO (National Reconciliation Ordinance). Let me make it clear: they can hold a million jalsas (rallies) but will not get any NRO,” he added.

The premier said he did not want to impose a lockdown which would hurt the economy, which he said was showing signs of “robust recovery”.

“Unfortunately, the Opposition’s only goal is NRO at whatever cost to the lives of people [and] the country’s economy.”