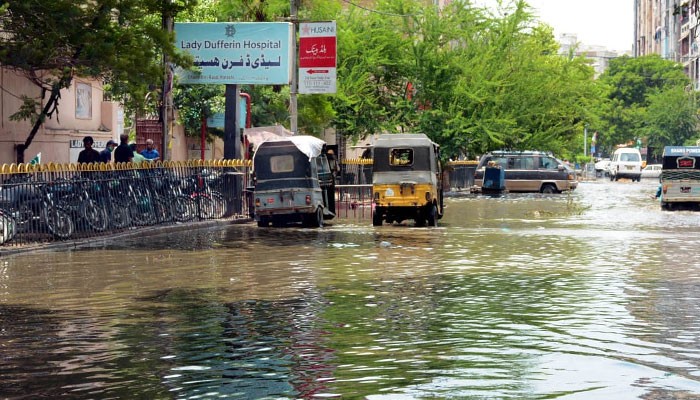 KARACHI: At least eight people, including three children, have died in various rain-related accidents here in the southern port city as the fourth spell of monsoon rains continued across Sindh, with heavy downpours, thunder, and lightning in various cities.

Amid the devastation brought on by the rain, a 12-year-old boy died after drowning in a naddi (canal) near Bhains Colony in Surjani Town, rescue sources said.

The PMD had forecast a continuation of the torrential rains today in Karachi, with the city expected to receive between 80-130mm of rainfall and gusty winds throughout the day.

The downpour is expected to continue intermittently till Saturday.

Also, several flights were either cancelled or diverted to other airports due to bad weather in Karachi.

Yesterday, at least three people had died in different rain-related incidents in Karachi. Two of them were killed due to electrocution in Gulistan-e-Jauhar and Lyari, while another drowned in the Lyari river near Maripur.

The rain showers did not come with glad tidings for the residents of the city as prolonged power outages continued to make life difficult for the people.

In view of the fourth rain spell in the monsoon season and the pandemic, the NED University had cancelled its midterms to be held on Thursday and Friday.

The inundation of various roads and low-lying areas had caused massive traffic jams and left large city areas without electricity.

Sources at the K-Electric had said more than 600 feeders tripped in different areas as soon as the downpour hit Karachi.

The rain had also uprooted trees in some areas, particularly in the city’s Garden locality.