Eid moon to be visible between 7.36pm and 8.15pm tonight, says Fawad 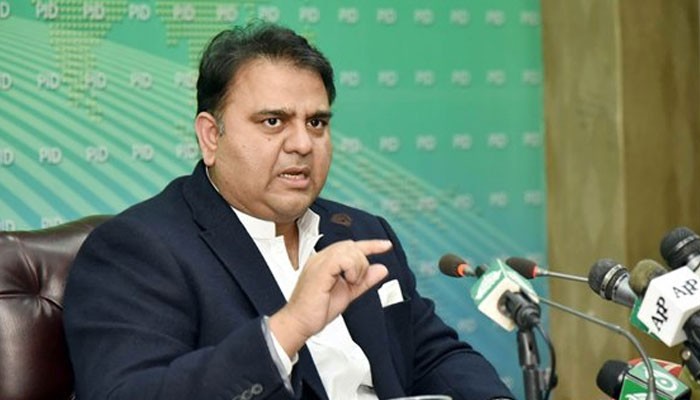 Federal Minister for Science and Technology Fawad Chaudhry has said the Shawwal moon can be sighted today, and the country may celebrate Eid-ul-Fitr on Sunday.

“The Shawwal moon was born on May 22 at 10:30pm and will be visible between 7.36pm and 8.15pm tonight in Badin, Thatta and Pasni,” Chaudhry said while addressing a press conference in Islamabad on Saturday.

He added that, according to the Ministry of Science and Technology, Eid-ul-Fitr should be celebrated in the country tomorrow.

However, fellow cabinet member and Minister for Religious Affairs Pir Noorul Haq Qadri quickly stepped in to prevent a dispute between the outspoken science minister and the religious body tasked with sighting the moon.

Qadri said the final decision on when to celebrate Eid still lies with the Ruet-e-Hilal Committee.

“The nation will celebrate Eid according to the decision of the Ruet-e-Hilal Committee,” Qadri said.

“Our beliefs and religious laws call for a visual sighting of the moon,” the minister said. “There is no bar on technology being used for that process,” he said.

“A nominee of the Ministry of Science and Technology has already been included in the committee. A decision will be taken by the ulema only,” he said.

Qadri said Fawad Chaudhry was a good friend, but seemed to be interfering needlessly in the matter.

‘Time for nation to celebrate together’

“Ever since the creation of Pakistan, there have been conflicts when it comes to religious events. When the Reut-e-Hilal Committee was established in 1974, these issues were resolved,” Chaudhry said at his press conference.

However, he added, the committee had always been in the middle of controversy.

“There are always different announcements by the Reut-e-Hilal Committee and Qasim Khan Mosque [in Peshawar, headed by Mufti Popalzai],” he said.

The federal minister rejected the notion that there was no relation between the sighting of the moon according to Islamic practices and the use of technology in doing so.

“Nowhere in the world is moon sighting an issue. With advances in technology it has become easier to sight the moon,” Chaudhry said.

Taking a jibe at the Reut-e-Hilal Committee, the federal minister said, “We are told sighting the moon with spectacles is halal, while sighting it through a telescope is haram. Aren’t spectacles also a form of technology?”

He added that instead of being divided, the country should come together for religious events.

Earlier this week, Chaudhry had stated that Eid-ul-Fitr will be celebrated on May 24 (Sunday) in many countries, including Pakistan.

Speaking during a TV programme, Chaudhry said that according to the calendar prepared by the science ministry, this year Eid will be celebrated across the country on May 24.

The minister had said the interesting thing is that the festival will be celebrated on the same day in almost all parts of the world along with Pakistan, including Indonesia, Malaysia and Saudi Arabia.

Pakistan, like all Muslim countries, is gearing up to mark Eid-ul-Fitr amid the coronavirus pandemic, which has taken more than 1,000 lives in the country.

The country started observing Eid holidays from May 22 and will continue to do so till May 27, a notification from the interior ministry said.