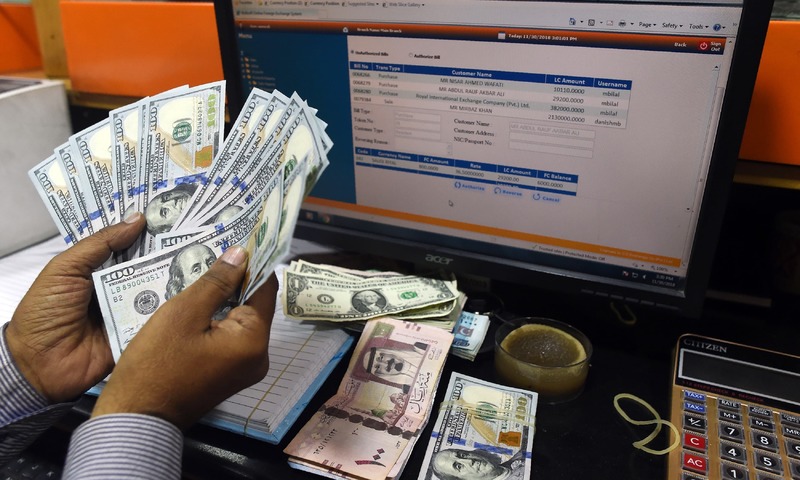 The United States dollar dollar continued its climb against the rupee on Thursday and hit an all-time high of Rs167 in the interbank market, according to rates provided by the Exchange Companies Association of Pakistan.

Compared to the opening value of Rs162.5, the dollar rose by Rs4.5, which translates into an increase of 2.77 per cent.

Similarly, the rates provided by the State Bank of Pakistan’s ready counter showed the greenback at Rs166.1, up from the opening value of Rs161.6 – again, a jump of Rs4.5.

“Foreigners are unloading their holdings in the T-bills prematurely due to the fear caused by the coronavirus, which has pushed up the demand for dollars in the interbank. Once that subsides, the situation will ease,” said Forex Association of Pakistan President Malik Bostan.

In addition, the emergency rate cut by the State Bank of Pakistan on Mar 24 has further hastened foreign unloading in the treasury bills, which do not offer as high a return anymore, according to currency dealers.

During this month, foreigners have divested over $1.5 billion from the T-bills, with outflows on Mar 25 alone standing at $71m.

Meanwhile, the open market witnessed no change as the dollar held steady at Rs160 but that is largely because the exchange companies were mostly closed due the ongoing lockdown.

“Operations were not even 1pc of the original level with only a handful of branches open with little to no customers,” said Bostan.

Due to this, exchange companies haven’t been able to supply cash to the interbank market, which has also put the rupee under strain, he added.

“The government is negotiating with multilateral parties for a $3.7bn coronavirus relief package. If done correctly, it is possible that Pakistan may have a soft landing once the crisis dies down – and that’s a long way from now,” said Eman Khan, an analyst at Tresmark.

Within the past two days, the dollar has gained Rs8, as compared to Wednesday’s opening value of Rs159, representing a rise of 5.03pc

After staying calm for almost half a year, the currency market started witnessing volatility from March 9 when rupee lost Rs3.65 in a single day.