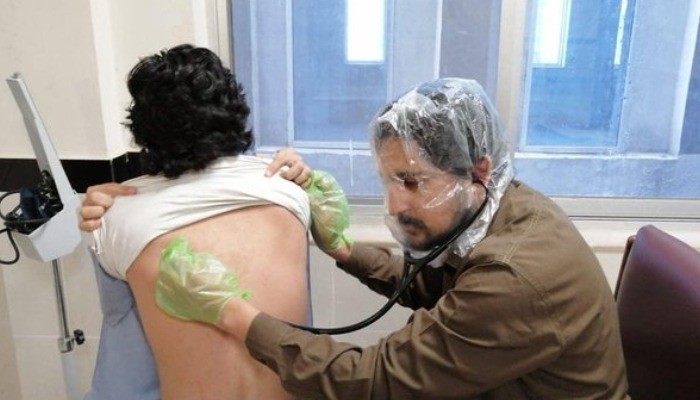 A doctor in Pakistan’s northern province recorded his protest against the non-availability of face masks and gloves by donning a plastic bag, as the number of coronavirus cases crossed 1,000 in the country.

Dr Amir Ali Khan, 30, works at the state-run Category-D Hospital in Swabi, Khyber Pakhtunkhwa. On Wednesday, he said, he had to check 30-40 patients but could not find any face masks and gloves at the local pharmacies to keep himself safe from the deadly virus.

“I had earlier written several letters to the district health department to provide us doctors masks or at least help us buy them,” Khan tells Geo.tv, over the phone, “But no one responded.”

Tired of waiting on officials, the doctor had himself photographed, covered in polythene bags, to record his protest, while checking a patient.

“Anyone can be a carrier of coronavirus,” he said, “The local government is putting us at a big risk.”

While there is only one confirmed case of the virus in Swabi, its adjoining city Mardan is under lockdown after reporting Pakistan’s first coronavirus death. Testing in the city continues to trace out more people who might have come in contact with the infected.

On Wednesday, the provincial finance and health minister tweeted that of the 46 people tested in the Mardan district, 39 had tested positive. All were asymptomatic.

Patients from villages in Mardan also visit the hospital where Khan works, as it is located on the road connecting the two cities of the district.

After Khan’s protest pictures went viral on social media, Khan says he was contacted by the provincial health department and provided face masks and gloves.

“We, doctors, cannot afford to get sick,” he adds, “If the number of cases keep increasing, we will be needed to directly deal with the influx.”

Source Link: Doctor in KP protests shortage of masks by wearing a plastic bag over his head | Pakistan

Saudi Arabia plans to boost oil exports to 10.6 million barrels per day from May – Business