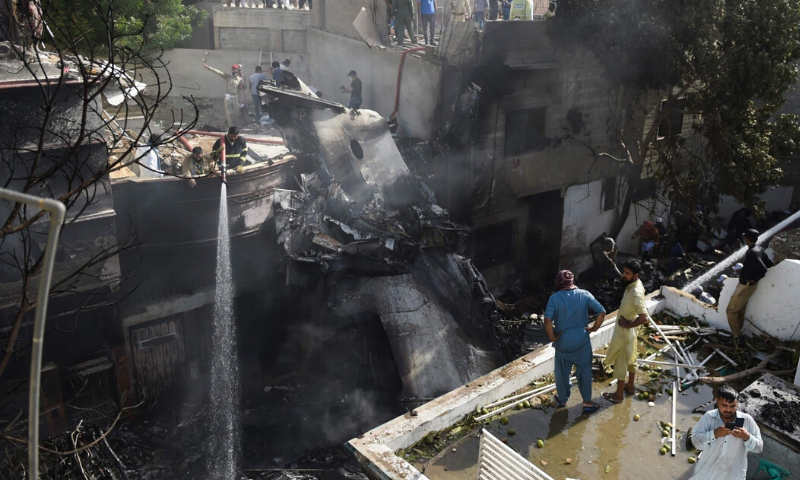 A Pakistan International Airlines (PIA) plane carrying an estimated 99 people crashed in a residential area in Karachi on Friday.

Meanwhile as reports of the crash spread, local politicians and world leaders reacted to the news with extreme sadness.

Across the border, Indian Prime Minister Narendra Modi said that he was “deeply saddened” by the loss of lives in the crash. The premier offered condolences to the families of those who died and wished the injured a speedy recovery.

“The news from Pakistan this morning is devastating,” wrote Canadian Prime Minister Justin Trudeau, adding that Canadians were keeping Pakistanis in their thoughts.

Afghan President Ashraf Ghani said that his “heart went out” to the families of those who died in the crash. He added that Afghans would stand by Pakistanis in their time of sadness.

A similar message of solidarity was tweeted by the Chinese Embassy in Pakistan, which said that it stood with the country in its time of sadness.

Australia’s High Commissioner to Pakistan Dr Geoffrey Shaw tweeted that his “thoughts and prayers” were with the families of those who were on the plane. He added that the Commission was trying to determine whether any Australians were also among the passengers.

Veteran Indian politician Rahul Gandhi also offered condolences and expressed the hope that there would be “many miraculous stories of survival”.

Prime Minister Imran Khan thanked world leaders for their condolences, saying that the people of the country valued the “support and solidarity” in their hour of grief.

PML-N party chief and Leader of the Opposition in the National Assembly Shehbaz Sharif said he was “heartbroken at the loss of lives” in the crash. He revealed that his colleague was also among the passengers of the ill-fated plane and prayed for the recovery of injured people.

Foreign Minister Shah Mahmood Qureshi wrote that he was “deeply grieved” over the plane crash. He termed the incident a “terrible tragedy” and said that his prayers were with all families.

He added that the nation must show “resolve and unity in times of crisis”.

PPP Chairperson Bilawal Bhutto Zardari also tweeted that the “loss of precious lives was saddening”, not only for him but for the entire country.

Jamaat-i-Islami chief Senator Sirajul Haq also expressed “deep grief and sorrow” over the lives lost in the plane crash and prayed for the families of the deceased to be granted patience to bear the loss.

Former prime minister Nawaz Sharif said that he was praying for those who lost their lives in the crash, adding that he was with the families in their grief.

In a message shared by his daughter Maryam Nawaz’s twitter account, he also paid tribute to the pilots and crew members of the plane, saying “they continued to perform their duties till their last breath”.

PPP Senator Sherry Rehman said the crash was “devastating news” and offered her condolences to the families of those who died.