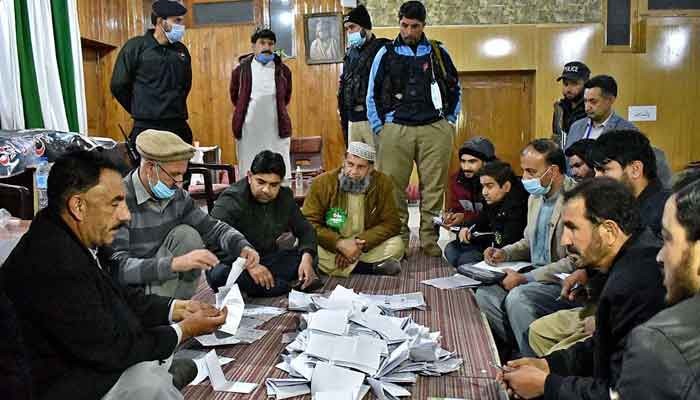 GILGIT: The counting of votes has begun in Gilgit-Baltistan’s GBA-3 constituency after polling ended at 5pm on Sunday.

The polling continued throughout the day without any break as a large number of people cast their votes despite cold weather in Gilgit.

Tight security measures on the occasion were taken at all polling stations of the constituency.

Elections could not be held in this constituency on November 15 along with all other constituencies due to the death of PTI candidate Jaffar Shah.

In the elections held that day for 23 of the 24 constituencies, PTI bagged nine seats and the independent candidates won seven, while PPP and PML-N managed to get three and two, respectively. Meanwhile, JUI-F and MWM secured one seat each.

The PTI is now in a position of forming its own government in Gilgit-Baltistan after six successful independent candidates joined the party.

Meanwhile, unofficial, preliminary results show that a PML-N candidate has won the election in the GBA-21 Ghizer-III constituency of Gilgit-Baltistan where a recount took place.

The unofficial results indicate that PML-N candidate Ghulam Muhammad has won with 4,908 votes.

Shah had requested a recount of votes of the entire constituency after  miscreants picked up ballot boxes from Gandai polling station.

Votes of the entire constituency will be counted till tomorrow, Returning Officer GBA-21 Arif Hussain said.

The official result will be announced only after the recount is completed, the returning officer added.

Uzair Baloch has been acquitted in 11 cases so far

China, under growing global pressure over its treatment of a Muslim minority in its far …