Breaking News
Home / News / Coronavirus updates, March 27: Latest news on the coronavirus pandemic from Pakistan and around the world | Pakistan

Coronavirus updates, March 27: Latest news on the coronavirus pandemic from Pakistan and around the world | Pakistan 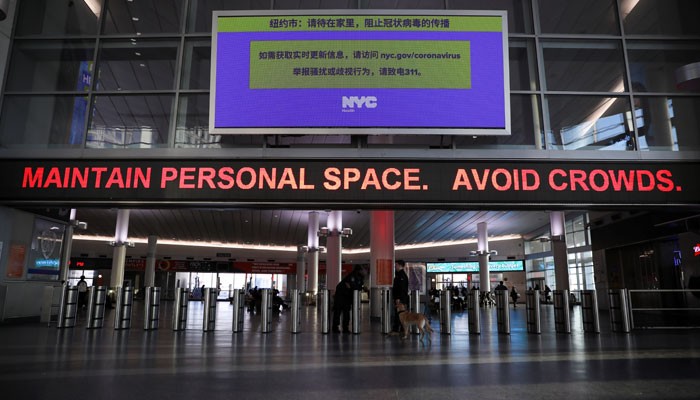 The province-wise break up of total number of cases as of 12:20am, March 27, is as follows:

At least 23,000 deaths have been recorded globally, more than 15,500 of which are in Europe since the virus first emerged in December, according to AFP.

More than 505,000 declared virus cases have been registered in 182 countries and territories of which at least 268,191 are in Europe, the worst-hit continent.

Read on for the latest updates from Pakistan and around the world.

Disclaimer: There may be some discrepancy in the number of confirmed cases reported at the country level due to differences in figures quoted by federal and provincial authorities.

Geo News is constantly gathering fresh information from concerned authorities and striving to keep our readers up to date with the most accurate information available.

Orange: All general updates coming in from Pakistan

Red: All reports on new cases in Pakistan

Maroon: All reports on new deaths in Pakistan

The Control Room at Commissioner Karachi office has been reinforced with more communication channels in order to facilitate the masses amid the virus outbreak.

Citizens can call at these numbers at any time for any sort of information or consultancy, Shalwani said.

The Karachhiites can also contact on WhatsApp at 01117120316. People can also give information regarding the spread of the coronavirus through this number.

There will be doctors inside the control room for consultancy regarding COVID-19, the official added.

09:15am – Washington US tops world in coronavirus cases, overtaking China and Italy

WASHINGTON: The United States on Thursday took the grim title of the country with the most coronavirus infections and reported a record surge in unemployment as world leaders vowed $5 trillion to stave off global economic collapse.

More than 500,000 people around the world have now contracted the new coronavirus, overwhelming healthcare systems even in wealthy nations and triggering an avalanche of government-ordered lockdowns that have disrupted life for billions.

In the United States, more than 83,000 people have tested positive for COVID-19, edging out Italy, which has reported the most deaths, and China, where the virus was first detected in December in the metropolis of Wuhan.

Punjab Chief Minister Usman Buzdar has confirmed that there have been a total of three deaths in Punjab from the coronavirus.

Britain has recorded more than 100 coronavirus deaths in a 24-hour period for the first time, with 115 people who tested positive for the virus dying, AFP has reported.

The outbreak is concentrated in London, with the head of an organisation representing bosses in the state-run National Health Service warning on Thursday that hospitals in the capital were being overwhelmed by COVID-19 patients.

The chief executive of NHS Providers, Chris Hopson, told BBC radio that hospitals in the British capital have seen an “explosion of demand… in seriously ill patients”, likening it to a “continuous tsunami”, with numbers predicted to surge in the next fortnight.

France has reported that 365 people, including a 16-year-old girl, have died from the coronavirus over the last 24 hours, the country´s highest daily toll.

Top French health official Jerome Salomon told reporters that a total of 1,696 people had died in hospital in France from the virus, emphasising that the toll does not include those who died at home or at retirement homes.

He said that 29,155 people had tested positive for the virus so far in France, adding that the real number of cases was likely far higher as testing was reserved for high-risk patients.

G20 nations have pledged a “united front” in the fight against coronavirus, saying they are injecting $5 trillion into the global economy to counter the pandemic amid forecasts of a deep recession.

US President Donald Trump and Russian President Vladimir Putin joined the emergency videoconference chaired by Saudi Arabia’s King Salman, who called for coordinated action while facing pressure to end an oil price war between Riyadh and Moscow that has roiled energy markets.

“We are strongly committed to presenting a united front against this common threat,” the leaders said in a joint statement after the summit.

“We are injecting over $5 trillion into the global economy, as part of targeted fiscal policy, economic measures, and guarantee schemes to counteract the social, economic and financial impacts of the pandemic.”

The figure was a sum total of the fiscal stimulus packages adopted by individual G20 states, the Chinese foreign ministry said, adding that Beijing´s share amounted to $344 billion.

Punjab Health Minister Yasmin Rashid has confirmed a rise in the total cases of Punjab to 405.

In the province, another death has also occurred from the virus, taking the total number of deaths in Punjab to three.

Of these, two were reported from Lahore and one from Rawalpindi.

The Sindh government has decided to ban congregational prayers in mosques till April 5, according to information minister Nasir Hussain Shah.

The ban will be in place from tomorrow (March 27). Only three to five persons will be allowed to pray in a mosque.

The federal government has decided to “restrain” Friday congregational prayers as new cases of the novel coronavirus continue to emerge across the country.

“It has been decided with a consensus that Friday prayers will be ‘restrained’,” said Federal Minister for Religious Affairs Dr Noor-ul-Haq Qadri during a news conference. “Only mosques’ administration staff and a limited number of worshippers will be allowed to pray inside mosques,” he added.

Source Link: Coronavirus updates, March 27: Latest news on the coronavirus pandemic from Pakistan and around the world | Pakistan

Saudi Arabia plans to boost oil exports to 10.6 million barrels per day from May – Business