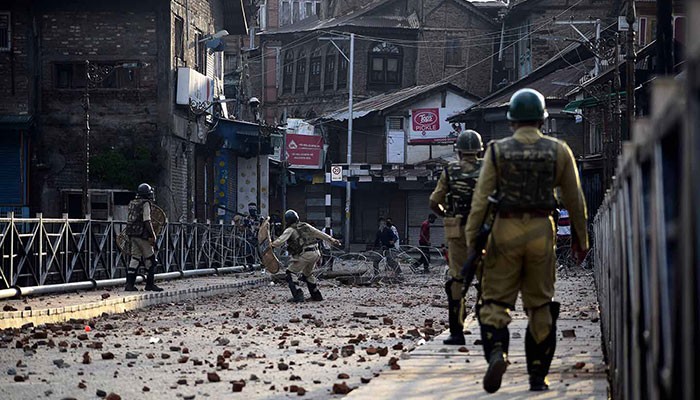 ISLAMABAD: Pakistanis and Kashmiris are marking the Kashmir Martyrs’ Day on both sides of the Line of Control (LoC), including Azad Jammu and Kashmir (AJK), today (Monday) to pay tribute to the martyrs of the 1931 carnage.

On July 13, 1931, around 22 Kashmiris were martyred by the troops of Dogra Maharaja for appearing outside the Central Jail in Srinagar in support of Abdul Qadeer, who was charged for instigating people to defy the Dogra Rule.

Functions and seminars across the AJK have been arranged to pay glowing tributes to martyrs on this day. The All Parties Hurriyat Conference (APHC) has appealed the Kashmiris to observe a complete strike in Indian occupied Kashmir (IoK) in view of the ‘Kashmir Martyrs’ Day.’

In a statement, the APHC spokesman said the strike call was given to stress the urgent need for a peaceful and just solution to the Kashmir dispute. “It was also meant to underline the need for stopping the continuous Indian oppressions against the Hurriyat leaders and the Kashmiri people,” he added.

Prime Minister Imran Khan also paid tribute to the people of Kashmir Monday for laying down their lives “for freedom and today they continue to fight and defy a Hindutva supremacist regime” which is adamant on wiping out the Kashmiri people.

The prime minister in his message on Kashmir Martyrs’ Day, while saluting the Kashmiris for their continued struggle against the illegal and barbaric Indian occupation of occupied Kashmir said, “The shuhada of 13 July 1931 were the forefathers of today’s Kashmiri resistance,” PM Imran tweeted.

“Their descendants have, generation after generation, laid down their lives for freedom and today they continue to valiantly fight and defy a Hindutva Supremacist regime bent on demographic engineering to wipe out the Kashmiri people and their identity,” he added.

The prime minister added that Pakistan will continue to support the Kashmiris right to self-determination till it is liberated.

Director-General Inter-Services Public Relations (ISPR) Major General Babar Iftikhar in his message for the Kashmir Martyrs’ Day, said earlier that the day was “reminiscent of utmost price paid for freedom by brave Kashmiris”.

In a statement shared on his Twitter account, the Pakistan Army’s spokesperson said: “Every single drop of blood shed, shall not be forgotten or forgiven. Decades of Indian atrocities failed to suppress insurmountable spirit and legitimate freedom struggle, destined to succeed, Inshallah.”

PML-N President in his message on Kashmir Martyrs Day said the people of the occupied valley were questioning the international community, United Nation and its Security Council when would they get justice.

Shehbaz said the names of those who sacrificed their lives fighting for freedom from the Dogra Regime under the British Rule, would be written in golden letters in the history.

“This resilience by 22 Muslims, who embraced martyrdom to complete the call for prayers, the Azaan, shows that Muslims cannot be defeated or subjugated.

“The roar of freedom struggle of the people of Indian occupied Kashmir still echoes through the occupied valley with full force,” he said.

Shehbaz said the suppression by India had worsened in the occupied Kashmir after New Delhi’s illegal annexation and the imposition of a curfew and a total communications blackout since August 5, 2019.