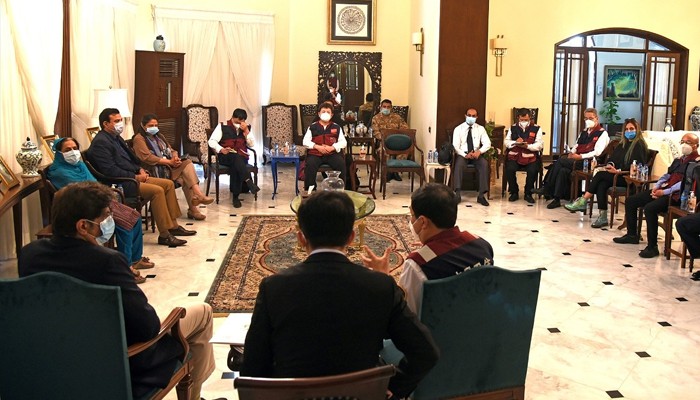 KARACHI: A group of medics and health experts from China met Sindh Chief Minister Murad Ali Shah on Wednesday to share Beijing’s experience in containing the novel coronavirus, which has so far infected more than 4,200 people in Pakistan and left above 60 dead.

As of the filing of this report, the provincial government had conducted 758 new tests, of which 50 samples were diagnosed as positive. The number of totals tests had risen to 10,981, as opposed to 10,223 the day before.

The nine-member delegation of medical experts from China, headed by Ma Minghui, urged Chief Minister Shah to continue ensuring that people were practising social distancing as it was one of the key measures to make sure the virus did not spread. A strict lockdown in the People’s Republic helped bring everything under control, they added.

The visiting delegation underscored that food ration distribution drives should also be carried out in isolation as crowds of any kind would destroy the efforts being taken to curb the virus spread.

The chief minister responded by saying he had ordered closure of all government offices, schools, business centres, factories, and public transport. “This is why we have contained it but still we have to do more measures to save our people,” he noted.

Shah lamented that a shortage of testing kits and equipment made it difficult for the provincial government to conduct tests on everyone. “We are testing those who have travel history and family members of the positive cases” for now, he explained.

The health experts assured CM Shah that they would provide expertise and other equipment to the provincial government.

Speaking during his daily video briefing from the CM House, the chief minister said 50 more cases of coronavirus had been detected in Sindh, bringing the provincial tally to 1,036, while two patients passed away over the past 24 hours, raising the provincial toll to 20.

Related: Pakistan is taking a page from China’s playbook to combat coronavirus

The number of totals tests has risen to 10,981, as opposed to 10,223 the day before. Of the 1,036 who had tested positive for the coronavirus, 382 were in self-isolation and 97 at isolation centers, he said. Another 257 were being treated at different hospitals throughout the province.

At least 637 of the 1036 cases were locally transmitted, Shah noted.

A week later, on April 1, the number of cases rose to 2,000, and in less than a week from the month’s start, they shot to 3,000. A day later, as of April 8, Pakistan’s tally of positive cases has gone beyond 4,000, he underlined, adding that the strategy, therefore, must be based on ground realities.

The chief minister once again urged people to observe social distancing measures as advised by experts. He added that it was critical to ensure that laws and advice must be followed during the remaining days under the lockdown as the restrictions would be eased by April 14.

Noting the importance of Shab-e-Barat as a night of prayers and forgiveness, the CM said those who wished to offer special prayers should do so at their own homes.

Shah also urged Ulemas to explain the importance of Shab-e-Barat on TV channels so that everyone could listen and understand at home.

Separately, Karachi police chief Ghulam Nabi Memon said earlier today that citizens would not be allowed to visit graveyards for Shab-e-Barat and that the authorities had set up 200 checkpoints to ensure the daily lockdown was observed.

A day prior, the Pakistan Ulema Council (PUC) had urged people to observe a Shab-e-Tauba — night of forgiveness — instead of a Shab-e-Barat, noting that everyone should pray at home and that congregations in mosques would not be allowed.

The PUC had earlier told people to avoid public gatherings, cooperate with the government, and heed the experts’ safety precautions.

CM Shah also participated in a Prime Minister Imran Khan-led meeting through video link, wherein he suggested that people coming from abroad via international flights should be quarantined at nearby hotels. While it was the federal government’s responsibility, he said the provincial leadership would help the Centre.

The chief minister also proposed that the federal government issue standard operating procedures (SOPs) for the post-lockdown period. A new discipline of life would have to be made lest things get out of control, he warned.

Bushra Ansari will come home if coronavirus is taken seriously

Over 1,000 people have yet to receive alternate plots after the Capital Development Authority constructed …