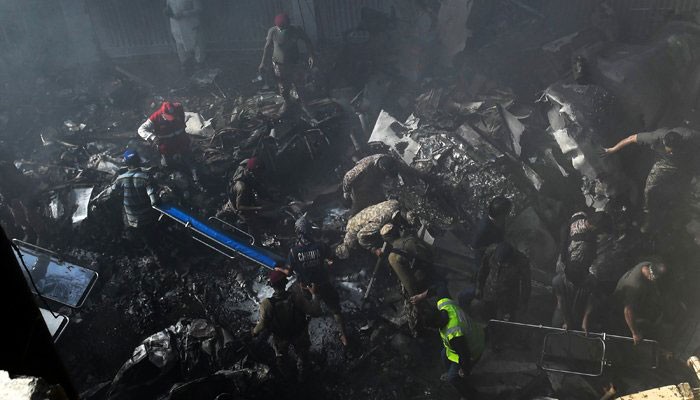 LAHORE: The Civil Aviation Authority (CAA) in a report issued a report on Tuesday about an alleged violation of landing protocol by the pilot of the ill-fated PIA plane that crashed in Karachi on May 22, reported The News.

According to the report, the pilot disregarded air traffic control’s (ATC) direction to lower the altitude.

In his letter to the general manager (safety), the additional director of flight operations has stated the plane’s altitude and speed were higher than the required limit for landing. The ATC had cautioned the pilot twice but he disregarded the warning.

During the ill-fated flight, the pilots made a first landing attempt and the plane briefly touched the ground multiple times, before attempting to land for a second time. Experts say the pilots likely tried to land the Airbus without lowering the wheels, damaging both engines so badly they soon failed.

On May 26, a team of Airbus technical advisers arrived in Karachi from France to investigate the crash. Under the international aviation rules, the BEA, the French air safety investigation authority joined the Pakistan-led inquiry because the 15-year-old jet was designed in France.

The PK-8303 tragedy has become the third most-catastrophic aviation disaster in the country’s history.

In a letter to all airlines operating the A320 narrow-body jets, Airbus said it will provide full technical cooperation to the PIA, Air France, and engine manufacturer CFM International after the crash.