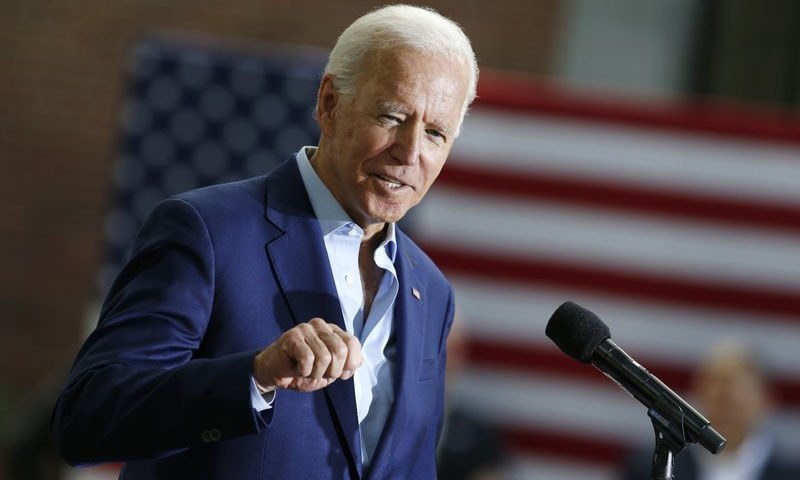 In a policy paper — “Agenda for Muslim American community” — posted recently on his campaign website, Mr Biden clubbed Kashmir and Assam in India with the forced detention of over a million Uyghur Muslims in western China, and discrimination and atrocities against Myanmar’s Rohingya Muslim minority.

“In Kashmir, the Indian government should take all necessary steps to restore rights for all the people of Kashmir. Restrictions on dissent, such as preventing peaceful protests or shutting or slowing down the Internet, weaken democracy,” says the paper while outlining the policies Mr Biden will pursue if elected president in November.

“Joe Biden has been disappointed by the measures that the government of India has taken with the implementation and aftermath of the National Register of Citizens in Assam and the passage of the Citizenship Amendment Act into law. These measures are inconsistent with the country’s long tradition of secularism and with sustaining a multi-ethnic and multi-religious democracy,” the paper adds.

Democratic presidential nominee comes with a clearer stance on many issues

Donald Trump also highlighted the Kashmir issue in his 2016 presidential campaign and also offered to help resolve the dispute in a meeting with Prime Minister Imran Khan in July 2019. Since then, he has twice reiterated his offer at the UN General Assembly and at an international forum in Davos, Switzerland.

But Mr Biden, who is so far at least 10 points ahead of Mr Trump in most opinion polls, has taken a clearer stance on this and other Muslim issues in his policy paper.

“The forced detention of over a million Uyghur Muslims in western China is unconscionable. As President, Joe will speak out against the internment camps in Xinjiang and hold the people and companies complicit in this appalling oppression accountable.”

Additionally, “systematic discrimination and atrocities against Burma’s Rohingya Muslim minority is abhorrent and undermines peace and stability”, the paper adds.

The paper declares that people of many faiths across the Middle East “are overdue for political and economic reform – as well as a return to principled American diplomacy – to help them find dignity, prosperity, and peace”.

Mr Biden, who was the vice president during President Barack Obama’s two terms at the White House, also defended the previous administration’s Middle East strategy, which led to the signing of the US-Iran nuclear agreement in July 2015.

But in May 2018, the Trump administration officially withdrew from the agreement and has since been following a policy that targets Iran while seeking a greater alliance with Saudi Arabia and its allies.

Promising to reform this policy, Mr Biden’s policy paper says that the changes would include “ending Donald Trump’s ‘blank check’ for Saudi Arabia’s human rights abuses at home and abroad and ending the war in Yemen”.

And to achieve this target, the Biden administration, if elected, would hold “tough conversations about human rights with both friends and rivals”.

The paper also rejects the Trump administration’s decision to bar people from some Muslim majority countries from coming to the United States, particularly as refugees. The new administration would “welcome refugees fleeing conflict to our shores again”, it declares.

Addressing another sensitive issue – the Israeli-Palestinian conflict – the policy paper says that “as President, Joe will actively engage Israelis and Palestinians alike to help them find ways to live together in peace, freedom, security, and prosperity and to champion a two-state solution”.

Share
Previous Meghan Markle’s former friend says she ‘changed’ after things got serious with Prince Harry
Next Steve Smith back training in the nets after 3 months; shares photo