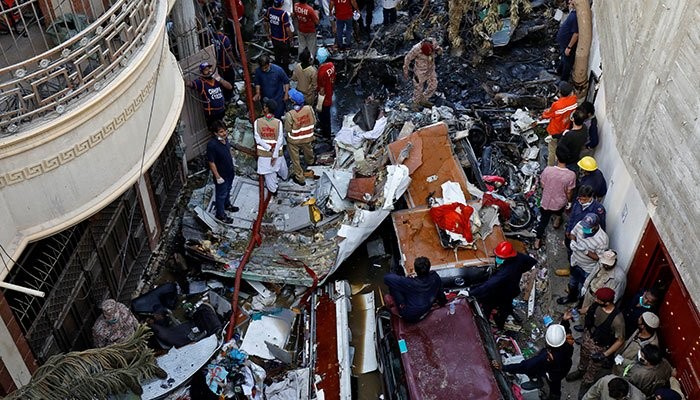 France’s Bureau of Enquiry and Analysis for Civil Aviation Safety (BEA), in a statement on Friday, said that “technical work” to download and decode the flight data recorder information as well as the cockpit voice recorder data from the Airbus jet that had crashed in Pakistan is complete.

It said the work was carried out at the request of Pakistan’s Aircraft Accident and Investigation Board (AAIB) and now analysis of the data will commence.

According to the statement by BEA, the Pakistan investigation board “will publish at a later date a preliminary statement on the event based on downloaded data”.

It said that the Pakistan board “is leading the investigation” and the communication is “on their behalf”.

Meanwhile, the aircraft manufacturer Airbus also issued a statement confirming that the blackbox data had been decoded.

“A technical review of the data is currently underway,” said Airbus, adding that Pakistan’s aircraft accident board will itself release an initial report on the findings.

What has emerged so far

Ninety-nine people were aboard the ill-fated PK-8303 PIA flight when the plane crashed on May 22 in a residential area near Karachi’s Jinnah International Airport, a few moments before landing.

Except for two survivors, all others perished.

The Civil Aviation Authority (CAA) in a report issued on Tuesday has alleged that the PIA pilot violated landing protocol, reported The News.

According to the report, the pilot disregarded air traffic control’s (ATC) direction to lower the altitude.

In his letter to the general manager (safety), the additional director of flight operations has stated the plane’s altitude and speed were higher than the required limit for landing. The ATC had cautioned the pilot twice but he disregarded the warning.

During the ill-fated flight, the pilot made a first landing attempt and the plane briefly touched the ground multiple times, before attempting to land for a second time. Experts say the pilots likely tried to land the Airbus without lowering the wheels, damaging both engines so badly they soon failed.

On May 26, a team of Airbus technical advisers arrived in Karachi from France to investigate the crash. Under the international aviation rules, the BEA joined the Pakistan-led inquiry because the 15-year-old jet was designed in France.

Aviation minister Ghulam Sarwar has said that a full report of the plane crash might take four to six months. The provisional report, however, would be made public within this month.

The PK-8303 tragedy has become the third most-catastrophic aviation disaster in the country’s history.

Sindh reports another 25 fatalities from coronavirus

Another 25 people died of coronavirus in Sindh over the last 24 hours, taking the …