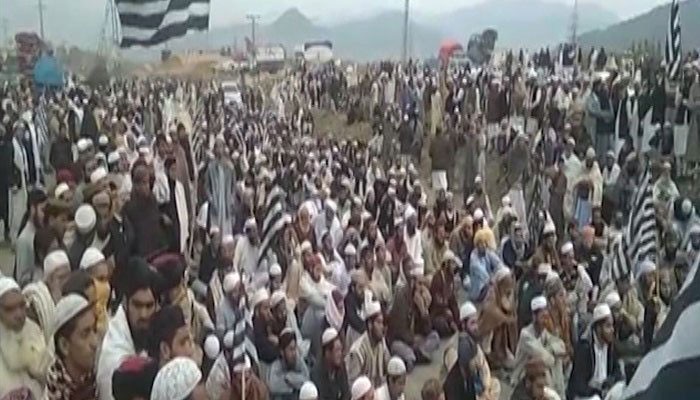 Thousands of Jamiat Ulema-i-Islam-Fazl (JUI-F) protesters continued to block highways across Pakistan for a fourth consecutive day on Sunday as part of the party’s ‘Plan B’.

Similarly, in Bannu, JUI-F workers are protesting on the Indus Highway Link Road affecting the flow of traffic flow.

In Karachi, the protests continued for a fourth day on Hub River Road. A large contingent of police and Rangers were present at the site of the sit-in.

Addressing the participants of the sit-in in Khairpur, JUI-F central leader Rashid Soomro said the sit-in plan was a success.

“We have plan till Z, but the government will go before Plan C,” he added.

On Saturday, JUI-F workers continued their sit-in at Dera Ismail Khan National Highway, in Nowshera near GT Road and Hakimabad along with Indus Highway Link Road and Malakand.

Protests and road blockades are also continuing in other parts of the country.

The protests, led by Maulana Fazlur Rehman, began with the ‘Azadi March’ on October 27 from Karachi. Thousands of supporters reached Islamabad on October 31, holding a two-week sit-in on the city’s main highway.

On November 13, Fazl ordered his supporters to disperse across the country to block roads, in what he termed as ‘Plan B’ to topple Prime Minister Imran Khan.

On Thursday protesters blocked the Grand Trunk Road between Islamabad and Afghanistan’s capital Kabul, causing lengthy delays. Similar disruptions were reported in Jacobabad — a city in Sindh linking the province with Balochistan and Punjab.

Educational institutions across Pakistan have been allowed to reopen from September 15. Federal Education Minister …