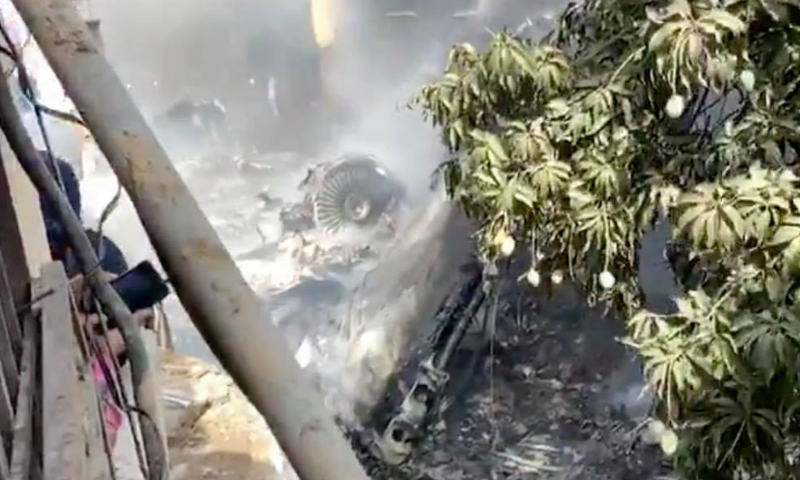 Sindh health officials have said that so far, 86 people have been confirmed dead, while two survived the crash.

What we know so far:

PIA spokesperson Abdullah Hafeez said that the A320 Airbus was carrying 91 passengers and 8 crew members from Lahore to Karachi on PK 8303. Eyewitnesses said the Airbus A320 appeared to attempt to land two or three times before crashing in a residential area near the airport.

“The aeroplane first hit a mobile tower and crashed over houses,” witness Shakeel Ahmed said near the site, just a few kilometres short of the airport, according to Reuters.

Meeran Yousuf, the media coordinator for the Sindh health minister, confirmed to Dawn.com that two passengers had survived and were brought to hospitals. She identified the survivors as Zubair and Zafar Masood, who is the president of Bank of Punjab.

A third person, who had earlier been identified as a survivor from the plane, was later identified to be a resident of the area where the plane crashed. She was among the 11 persons, who were injured when the plane crashed into the residential area, damaging several homes in its wake.

Yusuf said that the majority of the injured were women, as it was time for Friday prayers when the crash occurred. She added that all the injured residents were in stable condition.

Director Programming 24 News Ansar Naqvi was also among the passengers.

Footage showed plumes of smoke rising from the site of the crash within the congested residential area. Ambulances and rescue officials arrived at the scene to help residents. Eyewitnesses told DawnNewsTV that the plane was on fire in the air before crashing.

Videos from the crash site obtained by Dawn.com showed bodies buried underneath rubble and residents gathering in streets littered with debris while Rangers and Sindh police carried out rescue operations.

Another video showed Edhi workers and firefighters hosing down the remains of the aircraft and searching for survivors.

Soon after the crash, Sindh Minister of Health & Population Welfare declared an emergency in all major hospitals of Karachi.

Speaking to the media outside Jinnah Postgraduate Medical Centre, Sindh Health Minister Azra Pechuho said that officials were currently in the process of identifying the deceased in order to inform their families.

“We don’t know how many are injured and how many are dead. I am visiting hospitals […] we were already in an emergency situation due to Covid-19 so doctors were alert. We have also alerted surgical units,” she said.

According to eyewitnesses, the plane crashed hardly a few hundred feet away from the runway. A transmission of the pilot’s final exchange with air traffic control, posted on the website LiveATC.net, indicated he had failed to land and was circling around to make another attempt, reported AP.

“We are proceeding direct, sir — we have lost engine,” a pilot can be heard saying.

“Confirm your attempt on belly,” the air traffic controller said, offering a runway.

PIA Chief Executive Officer Air Marshal Arshad Malik, who left for Karachi, said the pilot told the control room that there was a technical issue and he decided to go around rather than land even though two runways were ready for landing.

“Our crew is trained to handle emergency landings. All my prayers are with the families. We will continue to provide information in a transparent manner,” said the spokesperson, Hafeez.

Sarfraz Ahmed — a firefighter at the crash site — told AFP the nose of the Airbus A320 and the fuselage had been heavily damaged by the impact, adding that rescuers had pulled four bodies from the wrecked aircraft, including some who were still wearing seat belts.

For his part, Pakistan Airlines Pilots’ Association spokesperson Tariq Yahya, while speaking on Geo News, said that the plane seemed to be gliding at the end. “Communications show that the plane did not have power at the end and was gliding and couldn’t make it to the runway,” said Yahya, adding that it didn’t have power when it was asked to climb to 3,000 feet.

He added, however, that these were “only assumptions and we will not know the exact cause until we find the blackbox.”

Sindh information minister Nasir Hussain Shah said that rescue efforts were still under way. He added that the administration had provided generators to help officials continue rescue efforts at night.

Prime Minister Imran Khan said he was “shocked and saddened by the PIA crash”.

“Am in touch with PIA CEO Arshad Malik, who has left for Karachi, and with the rescue and relief teams on ground as this is the priority right now. Immediate inquiry will be instituted. Prayers and condolences go to families of the deceased,” he said.

SAPM on Information and broadcasting Asim Saleem Bajwa said that on Prime Minister Imran Khan’s directions, all emergency services and resources have been mobilised and evacuation is in progress.

Chief Marshal Mujahid Anwar Khan, Chief of the Air Staff, Pakistan Air Force expressed grief over the tragic air crash. He further said that PAF stands by PIA at this difficult time and extends all out support in the rescue operation.

Federal Aviation Minister Ghulam Sarwar also expressed deep grief and sadness over the incident and has ordered the Aircraft Accident Investigation Board to conduct an “immediate inquiry” into the crash.

“We are with the affected families in their grief. The primary attention is on relief activities right now.”

In Pakistan’s most recent deadly crash, a PIA plane in 2016 burst into flames after one of its two turboprop engines failed while flying from the remote north to Islamabad, killing more than 40 people.

The deadliest air disaster on Pakistani soil was in 2010, when an Airbus A321 operated by private airline Airblue and flying from Karachi crashed into the hills outside Islamabad as it came into land, killing all 152 people on board.

Source Link: At least 86 killed as plane with 99 onboard crashes into residential area near Karachi airport – Pakistan