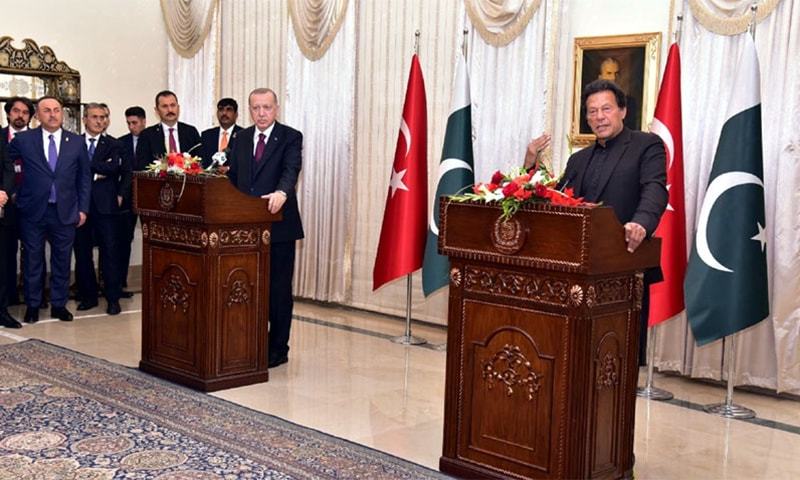 Prime Minister Imran Khan and Turkish President Recep Tayyip Erdogan on Friday addressed a joint press conference in Islamabad after the two countries signed a number of memorandums of understanding (MoUs) for cooperation in various areas.

In his speech, Prime Minister Imran said people had greatly liked President Erdogan’s speech earlier today during a joint session of the parliament. He reiterated that if the Turkish leader fought an election from Pakistan, he would do a “clean sweep”.

He thanked Erdogan, who was on a two-day visit to Pakistan, on the country’s behalf for speaking up against Indian atrocities in occupied Kashmir.

He noted that at least eight million Kashmiris have been under Indian siege for over six months, while Kashmiri leaders have been put in jail. “They have no rights … they are living in fear,” he added.

The premier reiterated that Kashmir is a disputed territory according to United Nations resolutions.

He said the Pakistan-Turkey trade relationship will see a new era with today’s signing of MoUs for strategic economic cooperation. Through timelines, the cooperation being carried out between Pakistan and Turkey will benefit both the countries, he added.

Prime Minister Imran said Pakistan backs Turkey regarding its issues with terrorism emanating from the Syria border. He noted that besides Kashmir, Turkey had supported Pakistan on the issue of the Financial Action Task Force (FATF) as well, adding that the two countries “stand together” when it comes to strategic international issues.

“Our cooperation apart from politics and economy […] is necessary because they (Turkey) have an advanced film industry. We want to develop content with them to address Islamophobia so that we can take a stand against the incorrect portrayal of Muslims,” the premier said.

President Erdogan in his speech said with his ongoing trip, he had the pleasure of visiting Pakistan after three years again. He said he saw the country as “our second home”.

He thanked Prime Minister Imran and the authorities for the “superior hospitality” extended to the Turkish delegation.

He said holding another meeting of the High-Level Strategic Cooperation Council, which was established in 2009, was one of the most important symbols of the Pak-Turk friendship.

“In the last meeting in Ankara, we had agreed to bring the level of our foreign trade volume to $5 billion by 2023. The strategic economic framework and its next action plan is almost ready […] It is the roadmap for how we can deepen our economic relations,” he added.

Erdogan said Turkey was ready to provide all the support that it can in the fields of transportation, energy, tourism, healthcare, education, and law enforcement — areas which he noted will help in the social and economic development of Pakistan.

“I am also confident that the prime minister is not going to spare any efforts in order to improve the business climate in Pakistan,” he said, adding that Turkey is standing next to Pakistan today, as it did in the past and will do in the future.

He said the support messages and condolences conveyed by Pakistanis, from the president to the ordinary people in the street, in the aftermath of the earthquake in Elazig city of Turkey is “an example that shows the affection between the people of the two countries”.

He said Turkey has received “strong support” from the Pakistani state and people regarding its military operations that it conducted in October in northern Syria.

“Our cooperations within the field of military and defence are the most dynamic fields of our bilateral relations. I would like everyone to know that we are ready to contribute in any way in order to enhance relations with Pakistan and Afghanistan which are both brotherly nations to us,” the president stressed.

Erdogan said Turkey stands in “deep solidarity” with the people of occupied Kashmir, who he said have suffered oppression and bad consequences for a very long time. “We are very sorry and disturbed to see that the situation in this province is deteriorating because of unilateral steps taken by one party,” he added.

“Turkey is in favour of finding a peaceful solution to the Kashmir issue through dialogue between Pakistan and India, under the basis [of] UN decisions and considering the expectations of our Kashmiri brothers and sisters,” he told the presser.

He reiterated that Turkey greatly appreciates Pakistan’s fight against terrorism and its efforts towards establishing regional stability.

Responding to his speech, Prime Minister Imran thanked Erdogan, saying the Pakistani people were happy at his visit because Turkey has had a special connection with Pakistan and the region since the Khilafat Movement.

He said the two countries’ relations have further strengthened since Erdogan became Turkey’s chief executive and Pakistan now wants to learn from the development carried out in Turkey under Erdogan’s watch.

“The areas in which Pakistan will specifically benefit [from the cooperation] are tourism and […] construction,” the premier said, adding that Turkey has already worked on creating affordable housing which the PTI government wants to emulate.

“The way in which he uplifted the economy … the country had circular debt and had taken IMF loans. It is important for us to learn from this,” he remarked.

Prime Minister Imran said the most important task for Pakistan is to provide employment to its young population which will happen through industrialisation.

Earlier, Prime Minister Imran and President Erdogan witnessed the signing of 13 MoUs by officials representing both the countries.

The ceremony came after the conclusion of the plenary session of the 6th round of Pakistan-Turkey High Level Strategic Cooperation Council in Islamabad.

According to state broadcaster PTV, the MoUs signed between the two countries concern cooperation in the fields of tourism and culture, food security, postal services, railways, military training, trade, transport and infrastructure, information technology, etc. An agreement was also signed for cooperation between the state-owned Turkish Radio and Television corporation (TRT) and PTV and Radio Pakistan.

President Erdogan and Prime Minister Imran then signed two documents — the declaration of strategic economic framework and the joint declaration.

The joint press conference was followed by a dinner hosted by Prime Minister Imran in honour of the Turkish president.

Earlier in the day, President Erdogan and Prime Minister Imran had held a one-on-one meeting at Prime Minister House during which bilateral relations were discussed.

Malaysia and Turkey have ‘no complaints’

Addressing a press conference regarding the Turkish president’s visit later in the evening, Foreign Minister Shah Mehmood Qureshi said “there is no other example” of the concern shown by President Erdogan regarding the Kashmir issue, PTV reported. He added that Turkey’s support for Pakistan on the issue of FATF is also worthy of praise.

Qureshi detailed the bilateral discussions that led to the signing of 13 MoUs between the two sides, saying the government wants to transform Pakistan’s friendly relations with Turkey into strategic economic relations.

The minister revealed that the two countries have also agreed to form two new working groups — the first on defence industry cooperation and the second on water and agriculture.

He said because Prime Minister Imran was unable to attend the Kuala Lumpur Summit last year, an impression emerged that Pakistan’s relations with Turkey and Malaysia were harmed. “This did not happen at all,” he stressed.

He said the premier’s recent visit to Malaysia, during which he had a “beneficial” meeting with Malaysian Prime Minister Mahathir Mohamad, had shown that there was complete understanding between the two countries. He added that Pakistan had taken Malaysia into confidence at every step and therefore there were “no complaints”.

Secondly, the minister said, “there was no complaint or grievance” from the Turkish leadership either.

He said the government wants to see the MoUs be converted into tangible projects for the benefit of both countries and the region.

“During the meeting, matters of mutual interest, regional security and measures to further enhance bilateral defence collaboration were discussed,” a press release issued by the military’s media wing said.

The army chief said that Pakistan values its unique relationship with Turkey and would always stand by its people.

“The visiting dignitary appreciated Pakistan’s contributions for conflict prevention in the region and for standing by Turkey and pledged the same for Pakistan,” the statement added.

With additional reporting by Sanaullah Khan.