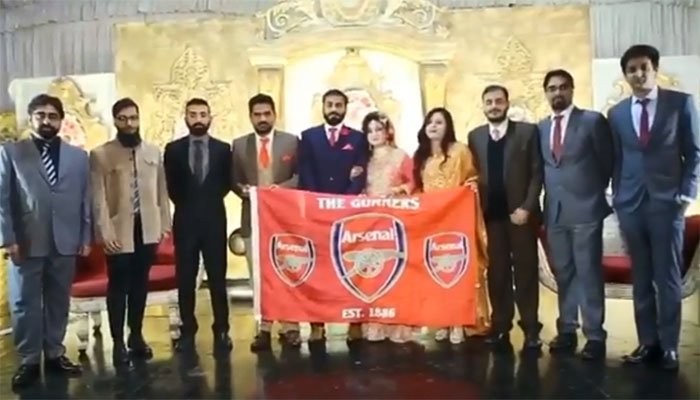 Arsenal midfielder Mesut Ozil on Monday made a Pakistani couple’s wedding much more memorable than they could have imagined after he shared a video of them holding an Arsenal banner on the podium.

The video shows the couple flanked by their friends and family and proudly displaying the banner with Arsenal logos and “the Gunners” written above.

The couple and co also made an “M” sign with their hands which is Ozil’s signature celebration style.

“Congratulations to this Arsenal Pakistan couple Inam-ul-Haq and Arooj Talat Khan. By the way nice celebration in the end, quipped. All the best for you two,” Ozil tweeted.

For those who are confused about the M sign, Ozil makes the sign not because his own name starts with an M.

In 2015 he had shared that he does it for his niece named Mira.

Ozil, a German footballer of Turkish descent, is of Muslim faith. He is known for his sublime passing and counts Real Madrid and Werder Bremen among his former clubs.

Share
Previous WHO: No smoking four weeks before surgery cuts risks
Next Accepted Islam and got married of my own will: Mehek Kumari