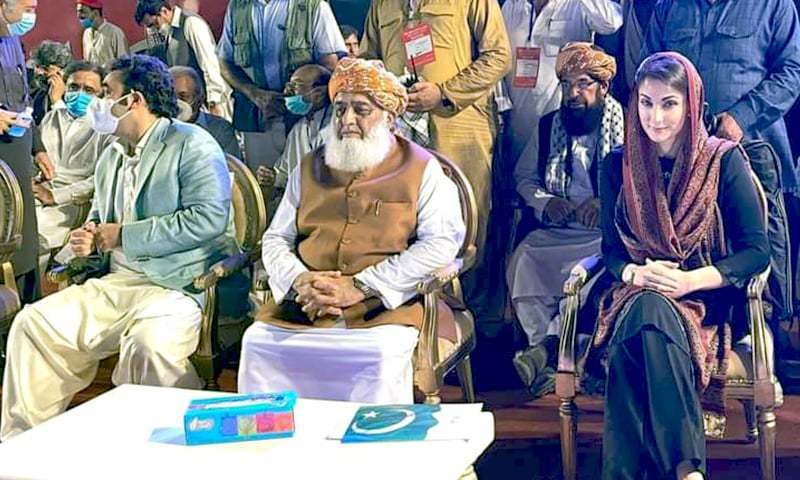 Hundreds of supporters of the opposition parties welcomed the leaders at the venue, dancing to the beat of PPP’s anthem.

The crowd waved flags of the various political parties represented by the PDM. Bilawal thanked the enthusiastic crowd and welcomed the JUI-F chief and PML-N vice president.

MNA Mohsin Dawar also arrived in Karachi earlier today along with supporters and workers of the Pashtun Tahaffuz Movement (PTM) group to attend the rally. Dawar said that PPP chief Bilawal Bhutto-Zardari had invited him to attend the public meeting. The PTM leader said he will address the crowd in which he will talk about the current situation of the country, missing persons as well the situation along the tribal belt.

Dawar had not attended the first rally of the opposition alliance.

Maryam arrived in Karachi on Sunday afternoon and was welcomed at the airport by a large number of party workers.

This is her first public appearance in the metropolis. After leaving the airport, Maryam visited the Quaid’s mausoleum to offer fateha. She was accompanied by former Sindh governor and PML-N leader Mohammad Zubair as well as Captain retired Muhammad Safdar, party spokesperson Marriyum Aurangzeb and former premier Shahid Khaqan Abbasi.

Speaking to a private news channel later in the evening as she left her hotel, Maryam said she was “grateful” for the enthusiastic welcome she had received in Karachi.

The PML-N vice president said that PDM’s primary aim was to restore the sanctity of the masses’ vote which was “stolen” in the 2018 general elections.

“The public is now ahead of us. We (opposition) have gotten late in representing the masses but now we have gathered at the PDM platform,” she said.

Former prime minister Nawaz Sharif, however, will not address participants today. In his speech at the Gujranwala public meeting on Friday via video link from London, Nawaz had accused Army Chief Gen Qamar Javed Bajwa and ISI chief Lt Gen Faiz Hameed of being behind his ouster as prime minister and of “bringing Imran Khan into power”, among other things.

Hitting back at his political opponents a day after their power show in Gujranwala, a furious Prime Minister Imran Khan declared that he would get “tougher” with them and vowed to start making all-out efforts to bring Nawaz Sharif back to the country and send him behind bars.

About 112 female officials of the special security unit have also been posted in different spots and 284 commandoes of the SSU will be present at the venue.

Since several roads and main thoroughfares have been blocked due to the rally, Karachi police have released alternate traffic routes to facilitate residents.

Furthermore, 159 officials of the Rapid Response Force have also been deployed to provide security.

Addressing the media at the venue, Sindh Murad Ali Shah said that the government had taken all necessary measures to ensure that health guidelines laid out to curb the spread of Covid-19 are observed during the upcoming rally.

Though masks have been made available at the venue, few people were seen wearing them.

Speaking in Multan on Sunday, Foreign Minister Shah Mahmood Qureshi said a government that has been elected into power, cannot be sent packing just because the opposition wanted it gone.

“This alliance, called PDM, is a temporary alliance. People consider it to be an unnatural alliance. Why unnatural? Because this movement does not have one flag, one leader or one ideology.

“Multiple people have gathered out of fear; fear of their own doing, of their incompetence, of the cases against them which could reach a conclusion soon […] of their political trajectory.”

He also pointed to friction among the parties saying at the Gujranwala rally, when on stage there were chants of ‘Prime Minister Nawaz Sharif’, there was silence among PPP supporters in the crowd.

He also called on Bilawal to look inward before dishing out criticism, saying his party has ruled Sindh for 12 consecutive years now. “How long will you get votes on behalf of Zulfikar Ali Bhutto and Benazir Bhutto?”

PPP chairperson Bilawal Bhutto-Zardari said he is confident about the success of the show and eventual fall of the Imran Khan-led government.

“The PPP is going to stage a massive power show, which would tell Imran Khan what the people think about him,” Bilawal told Dawn a day before the power show. “I don’t even have a shadow of a doubt over the success of the PDM campaign.”

“I am frequently arguing that it’s not for our people but for the PM to get panicked,” said the PPP chairman. “He [Imran Khan] has seen his fate. He can no more shift responsibility of his failures on past government for face-saving. People are asking questions and he has nothing to answer. The people are disappointed and this would lead only in the fall of Imran Khan and his government.”

JUI-F chief and PDM president Maulana Fazlur Rehman landed in the city on Saturday, pumping up the enthusiasm in the party and local leadership of the right-wing organisation.

“The JUI-F made the Gujranwala rally successful and it would do the same here in Karachi,” said party leader Qari Muhammad Usman. “You would see people of every age and ethnicity from our platform. The Oct 18 rally is expected to be much bigger than the one held in Gujranwala. We have mobilised the party cadre a week ago and made healthy preparation for its success.”