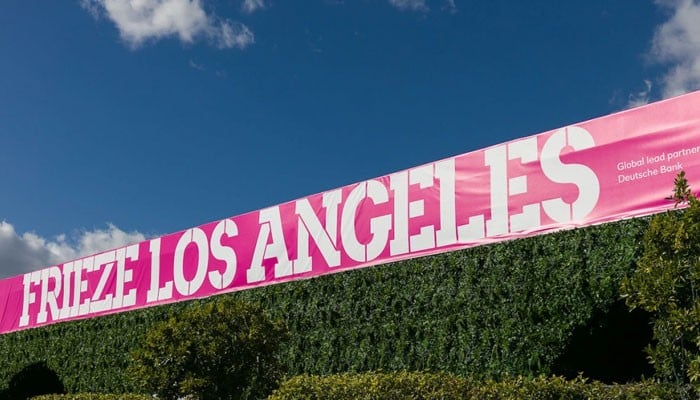 Patrisse Cullors, co-founder of the Black Lives Matter movement, created the dance work “[Expletive] White Supremacy, Let’s Get Free” in response to the politics of US President Donald Trump.

“So much of the last four years under this administration there has been a lot of anger, fear, helplessness,” she told AFP. “And whenever I feel that way in my personal life, I usually go and dance.”

Her project is part of Frieze’s second show in Los Angeles — a city which has historically struggled to maintain an international art fair, but is increasingly drawing wealthy collectors including local A-listers.

“Obviously being in LA means there is a wealth of celebrities and people in the movie industry, who are based here in the city, and many of them do actually collect art,” said Victoria Siddall, Frieze’s global director.

“The West Coast is a very long way from the East Coast and they are very different places with different cultures, different artistic communities,” said Siddall.

Outside the physical confines of Frieze’s tent, where paintings have traded hands for millions of dollars, artists like Cullors have been invited to showcase projects on Paramount Studios’ famous backlot replica of New York streets.

Several pieces draw on the movies for inspiration.

One replica Manhattan brownstone houses an exhibition dedicated to the representation — or lack — of Latino filmmakers in the movies.

Another invites visitors to play a bizarre game of chess inside an isometric grid made of wool from endangered sheep — all apparently inspired by an episode of Star Trek that was filmed close by.

One week after the Oscars drew fire for its lack of diversity, Cullors says her message is as appropriate for the movie industry as the art world.

Hollywood “has been white for far too long,” she told AFP.

“Los Angeles is one of the places that’s doing the best work at having a more multi-racial, more connected art world,” Cullors added.

‘If only Princess Diana had social media,’ writes Mariah Carey about invasive press