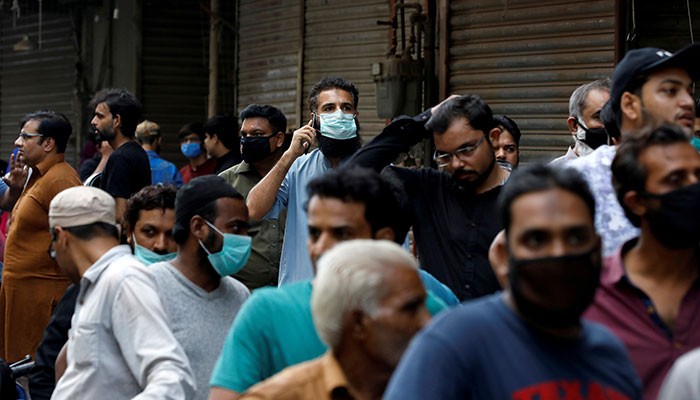 KARACHI: Health experts in the country have associated the number of declining coronavirus cases in the country to the presence of a kind of “non-specific immunity” that is unique to the Pakistani people due to being exposed to various vaccines.

Dr Rana Muhammad Safdar, a leading epidemiologist and coordinator of the National Emergency Operation Centre (EOC), Islamabad told The News that the percentage of coronavirus positive cases, the number of hospitalised patients and deaths have been declining in Pakistan since the start of July 2020.

“As far as the reason behind this decrease in cases is concerned, it could mainly be due to the presence of a non-specific immunity that is unique to Pakistanis due to multiple exposures of various vaccines, highly humid weather and low transmission season of respiratory illnesses in the peak summer,” Dr Safdar said.

Other experts and officials also agree that the number of cases in the country has been declining since the start of July, however, nobody could ascertain the reason behind the slowing down of the pandemic.

Experts added that this decline was also being seen in Afghanistan, Bangladesh and Iran, except India where COVID-19 cases and the deaths were increasing.

According to Dr Safdar, the presence of “a non-specific, unique” immunity could be one of the reasons why the number of positive cases were declining in the country.

He added that in addition to producing a specific immunity, all vaccines produced an innate, non-specific immunity in the human beings that prevented them from other pathogens also.

“Our population has been exposed to so many vaccines in their lifetimes, including BCG (Bacillus Calmette–Guérin) vaccine, which is primarily used against tuberculosis and OPV, that they must have strong immune responses against several other pathogens, including the novel coronavirus,” Dr Safdar said. “This non-specific immunity is playing an important role in slowing down the spread of this virus and reduced mortality, as compared to other countries of the world, in Pakistan.”

Dr Safdar added that another factor that could be the highly humid weather in the current monsoon season in Pakistan. “Due to humidity, the air becomes heavy and droplets containing the virus don’t go far when a carrier speaks coughs or sneezes,” he said.

“And lastly, it is low transmission season for respiratory viruses and its transmission in the sunlight is very slow. It is still spreading but mostly in shaded places,” Dr Safdar said.

Speaking about the reduced testing, Dr Safdar said that despite the number of coronavirus tests decreasing in the last two weeks, the percentage of positive cases had also decreased drastically, which showed that a fewer number of people were contracting the disease in Pakistan.

“At the peak of COVID-19 cases, 22-23% of people were testing positive in June 2020, but now the percentage of positive cases has dropped to 10% or less. The decline in cases is also evident from the reduced hospitalisation and a lesser number of people requiring ventilators’ support,” he added.

Why are the number of tests conducted daily falling?

When asked why there was a major shift in the number of tests declining in the country, the doctor said there were two major reasons.

He added, “The third contributory factor is the significant slowing down of the epidemic everywhere except Karachi, which is evident from decreased positivity along with case numbers, fewer suspects reporting for testing by themselves, a lesser load on hospitals, declining numbers of patients on oxygen and on ventilators, stable death counts, lesser daily healthcare infections and stabilisation of epidemic in Southeast Asia as a whole except India.”

Dr Safdar, however, added that the upcoming Eid-ul-Azha could pose a major risk as far as stemming the spread of the virus is concerned. “The future, however, remains uncertain, as, besides virus drop in new population settings, the upcoming Eid is a major risk. At least for the current wave, positive indications cannot be denied,” added.

Other experts have also been baffled and are unable to explain the decline in the cases.

When approached by The News, experts said there was “no concrete scientific evidence of the role of innate, non-specific immunity, humidity or the weather was available yet.”

Dr Faisal Mehmood, a leading infectious diseases’ specialist at the Aga Khan University Hospital said the role of innate, non-specific immunity in slowing down coronavirus was not known. “However, we do see a lot of sick people here as well. Research is ongoing on this,” he said.

When asked if the humidity had a role in slowing down viral transmission, he said, “Yes and no. Very dry air may help the droplet particles travel further in closed, likely ventilated settings. However, very high humidity may also increase the viral spread.”

He added that the slowing down of coronavirus cases due to the presence of non-specific immunity among the Pakistani people “is technically a possibility”, but no evidence for this idea was relevant in this case, “at least so far”, he added.

In response to a question about the possibility of the pandemic slowing down due to high humidity, he said it was “a conjecture, mostly”.

He added, “Actually 200 million people don’t live in a single container or space. Epidemics spread within social networks and local containers; they also slow down when the container gets saturated. This is a complicated one.”

He further said that the decrease in coronavirus cases was likely due to a mixture of multiple factors. “The adoption of masks and some NPIs helps in addition to some other factors perhaps. The flu/cold season is always a worry for respiratory viruses, but again this virus keeps surprising the world, so who knows,” he added.

Is the pathogen losing virulence?

Dr Muhammad Salman, a leading scientist and virologist at the National Institute of Health (NIH) Islamabad while talking about the drop in cases from 22% to 8%, said, “Nothing is known for sure how this novel coronavirus is behaving despite the fact that a lot of research has already been undertaken on it all around the world,” he said.

He added, “The decrease in the number of positive cases in Pakistan and other regional cases may be because the virus is losing its virulence. Sometimes when the virus transmits to so many people, it loses its virulence due to mutations, but again that needs to be researched. At the moment, we don’t have any specific answer to this question.”

UHS to conduct trials of Oxford University vaccine in Pakistan

According to varsity’s Vice-Chancellor Dr Javed Akram, it could take two months for the vaccine …