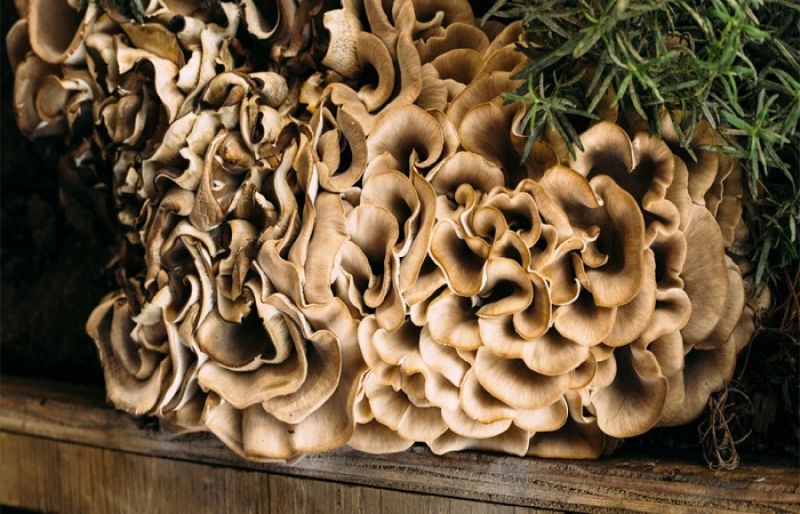 Gathering wild mushrooms can also be an extremely rewarding and interesting hobby. However, those who do it must proceed with the utmost caution.

Though many wild mushrooms are highly nutritious, delicious, and safe to consume, others pose a serious risk to your health and can even cause death if ingested.

For this reason, it’s critical to only hunt mushrooms with someone who’s highly experienced at identifying both edible and poisonous mushrooms.

This article lists 3 edible wild mushrooms, as well as 5 poisonous mushrooms to avoid.

Grifola frondosa, commonly known as hen-of-the-woods or maitake, is an edible mushroom that’s a favorite of mushroom hunters.

Hen-of-the-woods is a polypore a type of fungus that has small pores covering its underside.

They grow on the bases of trees in shelf-like clusters, favoring hardwoods like oak. These clusters resemble the tail feathers of a sitting hen hence the name “hen-of-the-woods.” Several hen-of-the-woods may grow on a single tree (1).

This mushroom is native to China but also grows in Japan and North America, especially the northeastern United States. It’s a perennial mushroom and often grows in the same spot for many years.

Hen-of-the-woods are grayish-brown in color, while the underside of the caps and branch-like stalk are white, though coloring can vary.

These mushrooms are most commonly found in the fall, but they can be found less frequently in the summer months as well.

Hen-of-the-woods can grow quite large. Some mushroom hunters have scored massive mushrooms weighing up to 50 pounds, but most weigh 3–15 pounds.

A helpful clue when identifying hen-of-the-woods is that it does not have gills, and the underside of its cap has tiny pores, which are smallest at the edges.

Don’t eat older specimens that are orange or reddish in color, as they may be contaminated with bacteria or mold.

Hen-of-the-woods is often favored by beginner mushroom hunters. It’s distinctive and does not have many dangerous look-alikes, making it a safe option for novices.

Hen-of-the-woods are quite nutritious and particularly high in the B vitamins folate, niacin, and riboflavin, all of which are involved in energy metabolism and cellular growt.

What’s more, research shows that these mushrooms may have anticancer, cholesterol-reducing, and anti-inflammatory properties.

The oyster mushroom is a delicious edible mushroom that resembles an oyster in shape and is commonly sought after by mushroom hunters.

Oyster mushrooms grow in forests around the world, including throughout North America.

These mushrooms grow on dead or dying hardwood trees like beech and oak trees. They can sometimes be found growing on fallen branches and dead stumps.

Oyster mushrooms decompose decaying wood and release nutrients into the soil, recycling nutrients to be used by other plants and organisms in forest ecosystems.

They can be found during the spring and fall months in the Northern United States and year-round in warmer climates.

Depending on the time of year, the tops of the oyster-shaped caps of these mushrooms can range from white to brownish-gray and are typically 2–8 inches wide.

The undersides of the caps are covered with tightly spaced gills that run down the stubby, sometimes nonexistent, stem and are white or tan in color.

Oyster mushrooms can grow in large numbers, and many different clusters can be found on the same tree.

Oyster mushrooms have thick, white, mild-tasting flesh that contains a variety of nutrients. They are particularly high in B vitamins, including niacin and riboflavin, as well as the minerals potassium, copper, iron, and zinc.

They also contain powerful anti-inflammatory plant compounds, including triterpenoids, glycoproteins, and lectins, which may offer some protection against chronic disease.

Oyster mushrooms are excellent sautéed with onions and garlic as a side dish. You can also add them to soups, pastas, and meat dishes.

The sulphur shelf mushroom is also known as chicken-of-the-woods or chicken mushroom. It’s a bright orange or yellow mushroom with a unique, meaty flavor.

Sulphur shelf mushrooms grow on hardwood trees in North America and Europe. They are widely distributed east of the Rocky Mountains in the United States.

These mushrooms can either act as parasites on living or dying trees, or derive nutrients from dead trees, such as rotting tree stumps.

Sulphur shelf mushrooms grow on trees in shelf-like clusters. They are commonly found on large oak trees and typically harvested during the summer and fall months.

It should be noted that sulphur shelf look-alike Laetiporus species exist. They grow on conifer trees should be avoided, as they can cause severe allergic reactions in some people.

Sulphur shelf mushrooms are typically orange or yellow in color and grow in overlapping shelf-like clusters on hardwoods, such as oak, willow, and chestnut.

The caps of the mushroom are fan-like or semicircular in shape and typically 2–12 inches across and up to 8 inches deep. The sulphur shelf does not have gills, and the underside of the caps is covered with tiny pores.

This mushroom has a smooth, suede-like texture and yellow-orange color, which fades to a dull white when the mushroom is past maturity.

Many sulphur shelf mushrooms may grow on a single tree, with individual mushrooms growing heavier than 50 pounds.

Like most mushrooms, sulphur shelf mushrooms are low in calories and offer a good amount of nutrients, including fiber, vitamin C, potassium, zinc, phosphorus, and magnesium.

Sulphur shelf mushrooms also contain plant compounds, including polysaccharides, eburicoic acid, and cinnamic acid. They have been shown to have antifungal, tumor-inhibiting, and antioxidant properties in test-tube and animal studies.

Sulphur shelf mushrooms should be eaten cooked not raw. You can bring out their meaty texture and hearty flavor by sautéing them with butter, adding them to vegetable dishes, or mixing them into omelets.

Poisonous mushrooms to avoid
Though many wild mushrooms can be enjoyed safely, others pose a threat to your health.

Death cap. Death caps are among the most poisonous of all mushrooms and responsible for the majority of mushroom-related deaths worldwide. They grow in many countries around the world.

Conocybe filaris. This mushroom grows in Europe, Asia, and North America and contains the same toxins as the death cap. It has a smooth, cone-like cap that is brownish in color. They are highly toxic and can be fatal if ingested.

Autumn skullcap. Also known as the “deadly Galerina,” autumn skullcaps are among the most poisonous of mushrooms. They have small, brown caps and grow on rotting wood.

Death angel. Related to the death cap, the death angel grows along the West Coast of the United States. This mushroom is mostly white and can cause severe illness and death if eaten.

False morels. These resemble edible true morels, making them especially dangerous. Unlike true morels, they are not completely hollow when cut.

In addition to the mushrooms listed above, many more types of poisonous mushrooms exist.

If you are ever unsure whether a wild mushroom is edible, do not eat it. Some mushrooms can cause severe sickness and even death.