Coke Studio all set to release the finale of season 12 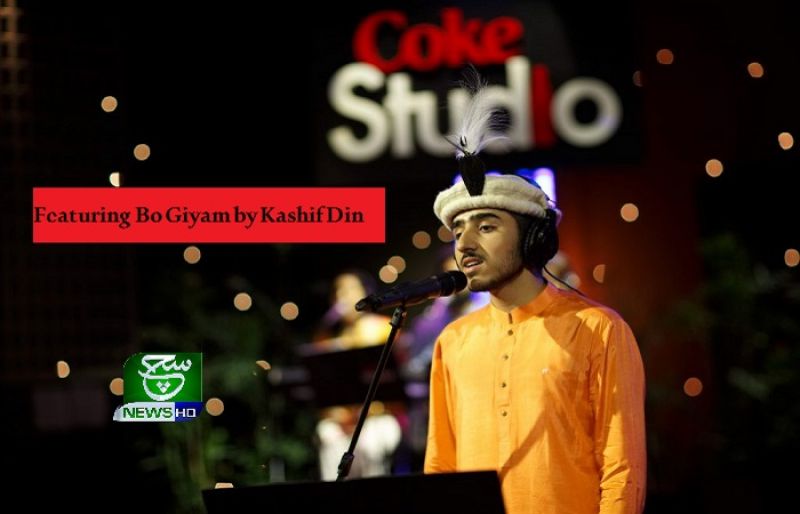 Coke Studio’ will be releasing the sixth and final episode of Season 12 on 29th November 2019, featuring Bo Giyam by Kashif Din and Nimra Rafiq, Mundiya by Ali Sethi and Quratulain Balouch, Aaye Kuch Abr by Atif Aslam, and Tiri Pawanda by Harsakhiyan.

Newcomer Kashif Din has traveled all the way to Coke Studio from Hunza with Bo Giyam, an original composition with Burushaski lyrics written by Nas Nafees, a poet who also hails from the same valley. Fusing the folk music of Hunza with contemporary colors, Bo Giyam is a song of heartbreak and disappointment. Its lyrics express the speaker’s complaint, wrapping his grief in images of nature: seeds that they have sowed, only to watch them ripen in someone else’s garden, fruits that have fallen in another’s home, the desolation of mountains. Joining Kashif on stage is Coke Studio’s family member and backing vocalist Nimra Rafiq, who adds Urdu lyrics to the composition, echoing the yearning that is being expressed in the song’s Burushaski lyrics. Fusing the traditional with the contemporary, Burushaski with Urdu, Bo Giyam creates a space that invites the listener to feel the gentle longing of its poet’s sorrow.

“When the world came into existence, so did music. There is music in everything. There is a scale in every voice. Everything moves to timing. Our whole lives move to a beat and even the heartbeats to a specific time. As far as I’m concerned, the entire world is music.” said Kashif Din.

“It feels nice to have reached this stage and to look back and think of the struggles I had faced as a musician. It doesn’t feel bad; it feels like it was worth it,” said Nimra Rafiq.

Rediscovering coy banter between romantic partners from the film Mukhra, 40 years later Ali Sethi and Quratulain Balouch take the stage with the festive Mundiya. Originally titled Mundiya Dupatta Chadd Mera, the song was sung by the iconic Madam Noor Jahan and Nadeem Baig and composed by Wajahat Attre. The lyrics tell the story of two strong-willed characters in a flirtatious back and forth conversation with each other. Enamored by the original, Ali heard something in Quratulain’s voice, a “khanak” (trill) that reminded him of Madam Noor Jehan’s bold, uninhibited, “Mundiyaaaa,” from the original song. What began as a chance studio jam between the artists turned into the genesis of Coke Studio’s Mundiya. The character’s conversation is complemented by the contrasting vocal tones of the two artists at play — Quratulain’s open, uninhibited vocals juxtaposed next to Ali’s more controlled, calculated vocal movements exhibit the ebb and flow of the song. To accentuate the energy between the characters, the song is playful and cheeky, with flamenco elements that create a colorful soundscape.

“Music has enabled me to feel. It has simplified emotions for me. It has helped me understand life.” said Quratulain Balouch.

Answering the call of an artist’s search for personal expression, this season, Faiz Ahmed Faiz’s poetry is incarnated in the voice of Atif Aslam with Aaye Kuch Abr. Originally performed by the Mehdi Hassan Khan, the ghazal speaks of solitude, the sorrow of missing one’s love and finding personal solace in life’s little pleasures. For Atif, this was a personal undertaking as an artist as he connected to the words, finding beauty in the lyrics and inspiration in Mehdi Hassan’s original. A personal reflection of Faiz’s inner state during his imprisonment in Hyderabad Jail, the song’s poetic depth provides a space for one to find the common humanity in their difficult emotions. A challenge that Atif did not shy from, the singer creates this rendition not with the intention to replicate what Mehdi Hassan accomplished with the piece but to cherish its beauty and carry its tradition forward into the world. “Before you even touch a piece like this,” he acknowledges, “you think twice. But the work of legends is not meant to be feared.” With the respect that is due to the artists of bygone eras, Atif Aslam wants to share with today’s generations the artistic wealth and legacy that these artists have brought to the world.

Verses were written by Shaikh Ayaz to find expression in the voices of Harsakhiyan, a trio of sisters hailing from Lahore, as they sing Tiri Pawanda on this season of Coke Studio. While the poetry of the song is contemporary, it is set to a musical arrangement that was composed by the Sufi saint Shah Abdul Latif Bhittai, which has been handed down through history in his collection of work, the Shah Jo Risalo. Tiri Pawanda bemoans separation but is laced with a deep sense of hope, painting a picture of nature’s ever-changing cycles and seasons — as seasons change and colors return to flowers, and birds return from their migrations, the poet hopes to meet their beloved once more. Joined together with a stanza that is addressed as a complaint to an absentee lover, Tiri Pawanda is presented in an ambient, spacey soundscape that invites audiences to ponder upon the meanings woven into its verses.

“Music is a part of nature and we are an instrument of nature. The voice that comes out of you is nature, it is otherworldly, how can you have a right over it? Your voice belongs to nature and God. You can thank Him for it but you can’t claim it.” said Harsakhiyan.

Source Link: Coke Studio all set to release the finale of season 12

Share
Previous Umesh Yadav on his Test comeback: Knew I’d get my chance
Next Legislating on army chief’s appointment ‘a matter of pride’ for govt: attorney general – Pakistan