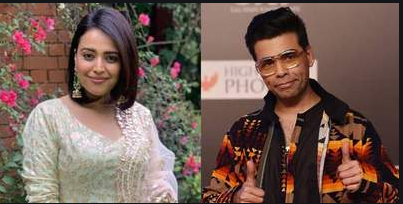 Before Kangana Ranaut made an appearance at Koffee With Karan and started the nepotism debate in Bollywood, another Indian actor inquired the ace director Karan Johar of the same.

Swara Bhaskar recently shared a 2016 video in which she could be seen asking Johar if launching star kids with his projects is a conscious decision or ‘something that just happens’.

Replying to which Johar said, “I’ve launched two kids from the movies – Varun (Dhawan) and Alia (Bhatt) – and none of those are results of nepotism for me. To the naked eye, it looks like these guys are clicked, groomed, they know each others’ aunts, sons, nephews, and it’s easy for them to work with each other.’ But it wasn’t the case for me. When I was making for Student Of The Year, I had two assistant boys. One happened to be David Dhawan’s son, who came to me because his mom had called me because he wanted to be an assistant not an actor and Sidharth Malhotra walked into the office to meet Karan Malhotra. The only reason Karan took him as an AD because of the same last name.”

Johar continued, “These two boys happened to be on the set at the right time. With Alia, I had no connection with Mahesh Bhatt. In fact, for the longest time, I had an issue with Mahesh Bhatt and I didn’t even know he had a daughter, till I was told by my writer Niranjan Iyenger that you should meet Pooja. But I do agree with you Swara, sometimes what is in front of you is easier than looking beyond it. But I think things are now changing and there’s a lot of talent from outside the industry and they are being credited finely.”

Johar has recently come under fire for allegedly giving more space to the star kids than the outsiders in the industry. The nepotism debate has once again caught fire after the untimely demise of Sushant Singh Rajput.

Share
Previous Shoaib Akhtar: Regret not stopping Sushant and having a word about life
Next Organic Meat’s IPO Tuesday: are its shares worth your money?